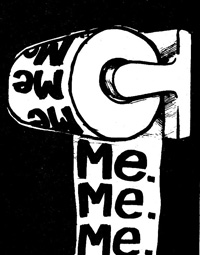 A Band Called Me

It’s amazing how A Band Called Me keeps coming back to you, like an old pitted rubber ball you meant to hurl into eternity only to be painfully reminded when it slaps you upside the head, that you’re sleeping off one of the human race’s all time greatest hangovers at the local lockup.

But that’s how it is with A Band Called Me and their new album, Me in the Key of E, is even more so. This latest work includes two cuts from the band’s last album, I, a ten song CD that submerged in its entirety when the band’s former drummer Paul Fish, now of the Hell Dwellers, plunged a van filled to the gills with all 20,000 copies into the toxic Assabet River on his way back to Boston from a Holyoke recording studio.

It took the band nearly two days, but thanks to an incredible series of coincidences, they did find just the right drummer in one Tony Tundra, a.k.a. Tawny Tony Tundra. The original drummer for Pud Munky, now with the Spyou Merchants, Tundra is probably the only percussionist this side of K-Tel who could duplicate Fisher’s spices, dices, and slices not sold in stores techno-vegamaticity. And he doesn’t drive.

“My father is general manager at Scary World, so we had promises from ‘ARF and ‘FIX to get air play for the two cuts last October during Halloween season when Dad did a lot of advertising. We took those two cuts from I and put them on Me using Tundra as the drummer on the new versions,” explained Hans Onanson, A Band Called Me’s lead guitarist.

It’s hard to imagine experiencing Me with no Hans, as he is the only original member of this nine year old Boston based bunion.

“I’m just one of the group,” Hans says modestly as he gestures over to the band’s nameless and faceless 18th drummer and the equally nondescript 27th bass player. “We’re a team, a family really. We’re in this together through thick and thin. Unless some major label dictates otherwise, then we would have to do what’s good for Me as a whole, not just one individual. Even the Beatles scuttled their drummer, Pete Best when the guys in suits told ’em where the dog died.”

Like I, Me in the Key of E is an album whose primary message is one of self affirmation, particularly if the self in question happens to be a lead guitarist named Hans Onanson. With song titles like “I’m the Meaning of Life,” “Never Gonna Let Me Go,” “I Love Me More Today than Yesterday”, and “I’m My Everything” combined with familiar pop melodies from the sixties and seventies that are almost but not quite drowned out by Onanson’s Friday the 13th Part 12 guitar licks, it is perhaps understandable that Onanson spends much of his time in civil litigation defending the group against law suits for copyright infringement, and acoustic vandalism. “Individual expression is under attack everywhere, but we’re fighting back on stage and in the courts,” Hans says.

Critics suggest that too frequently Onanson’s quest for individual expression drifts into a mindlessly nihilistic auto-eroticism, especially in his Rolling Stones tribute medley “Own Sugar,” wherein Onanson takes stage with a flesh colored electric guitar, then sprays wall paper paste form out of his instrument’s pointy end through a tube secreted in the back. At the climax, Onanson is jamming with his spitting ax, thrusting rhythmically between his legs.

Onanson no longer actually sprays his audience, but an illusion created by two 20 foot mirrors he erects each performance to watch himself play sends many in the front rows scurrying for cover.

“Everyone’s doin’ it. I’m just the only guy singin’ about it,” Hans says. “That’s why they’re all jealous. Deep down inside, we’re each the president of our own little fan club, and Me in the Key of E is the album for people who not only know it, but want to embrace that fundamental truth.”

Me in the Key of E is a great album to listen to when you’re sitting home by yourself curled up with big toes at rest on both triggers of a fully pumped and primed ten gauge double barreled shot gun. This album not so gently reminds you that after all, you’re not the biggest living asshole in the world. That title indisputable goes to Hans Onanson, lead guitarist of A Band Called Me. 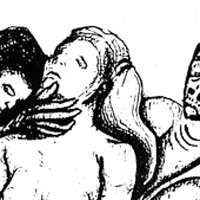 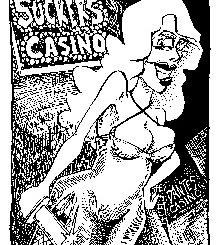 Dispatches From the City of Death – Fiction