with Faith No More at Avalon
by Joe Hacking

While herds of sports fans crushed into Fenway Park on May 18th, droves of dedicated Faith No More disciples crushed into Avalon to check out a guaranteed night of funk metal. Not too many people even knew what Steel Pole Bathtub was all about, so when they strolled on stage, the response was polite. I’d like to say the crowd went wild as the set progressed, but the young crowd was pretty much there to see FNM, and SPB was doing some pretty weird, cathartic stuff. Sounding like a cross between early Pink Floyd, The Clash and Melvins, Steel Pole Bathtub shed some sweat upon Avalon’s stage that night and delivered a high-energy performance in the face of an impatient room.

Their tunes possessed a catchiness caused by guitarist Mike Morasky’s percussive style and Darren Mor-X’s tight, military/tribal drumming. Dale Flattum seemed to revel in creating a deep bass pond in which the other two splashed. Sound effects and samples drifted out of the amps as they droned and shimmered their way through their short set, but the most important thing to know about Steel Pole Bathtub is that they dropped into a smoking groove and jammed it out until their time was up. Then it was FNM’s turn.

The crowd exploded in unison, followed by the amps exploding with the sound of “Ricochet” from their new album, King For A Day Fool For A Lifetime (Slash) FNM came on like a fully-loaded tractor trailer doing 100 MPH in the slow lane. Singer Mike Patton was the caffeined-out driver of the FNM semi, leaping, thrusting and jerking from the get-go like a poster boy for hypoglycemia. They barreled right into a flawless “Mid-Life Crisis,” turning the pit into a writhing, moshing sea as Mike Bordin’s drums punched the air like a sonic sledge.

Unfortunately, for all his energy, Patton’s voice was blown out from some previous night’s ululations. But replacement guitarist Dean Menta (replacing the phantom Mr. Bungle guitarist, who recorded on King For A Day…) was solid. There were times when Jim Martin’s metal attitude was missed, but as a stand-in, Menta was great, considering he was a roadie before the tour. Keyboardist Roddy Bottum provided the candy coating which makes FNM so smooth, especially on the disco-colored “Evidence,” also from King For A Day… Mike Gould gets second place for Best Stage Presence behind Patton. He is almost single-handedly responsible for FNM’s funk edge, which he displayed during “Epic.” Faith No More stand as one of the most creative, risk-taking bands around, while Mike Patton is one of the most entertaining, diverse talents of our generation. Their live performance lives up to this statement. If they come around again, catch them! 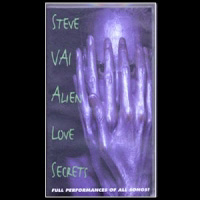