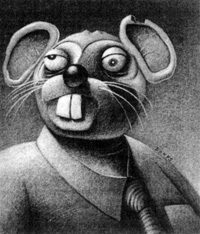 At The Smoking Gallery
by Kerry Joyce
illustration by Kevin Banks

I hauled my sweltering, suburban white boy consciousness to an opening at the Smoking Gallery on Stillings St., “An Exploration of Contemporary Illustrators.” Despite the heat wave, there was an impressive turnout of at least two hundred people, there to to view the work of artists whose efforts must soar above the clang and clatter of modern life, without the benefit of amplifiers. My plan was to munch down as many cheese larded crackers as I possibly could, but it was too hot so I instead went with the sparkling wine coolant. I was especially interested in the illustrations of Lollipop contributor Kevin Banks. Framed, paned, and undiluted by the computer scan and the ker-thunk of mass media reprint, the originals were even better than I anticipated.

As modern writers, musicians as well as visual artists grapple with their individual sixties hangovers, Banks has shrugged off the scraggly (Crum and Crummer) legacy of underground illustration, with smooth lines and sharp edges. Instead of merely exaggerating the grotesque, Banks gives his renderings their own twisted symmetry. His illustrations are starkly imaginative, often pleasantly ambiguous in point, but never in the power of feeling they convey.

Also memorable were two paintings by Cynthia von Buhler, who synthesizes traditional standards of beauty and technique in the fine arts, with her own startling flourishes, turning tradition on its ear.

There is nothing really controversial on display. Nothing here to inflame the public or privates of Senator Jesse Helms. Just a beautiful yet unsalacious painting of a nude female by Anna Wareham.

Many of the displayed works have the look and feel of magazine illustration, albeit of the “tone it down, we can’t run that” variety, although a few previously appeared in well known national magazines.

The gallery exhibit, which runs until August 2nd, also includes photographs, for the most part combined with other media, such as sculpture, painted canvas, and in one interesting case, by Jon Lezinsky, the sides of aged packing crates, which serve as a sort of backdrop for photos of baseball legends from yesteryear. Very hip.

Dillion Fence – with The Gravel Pit at Mama Kin – Review

Ignite – with Earth Crisis at the Middle East Cafe – Review