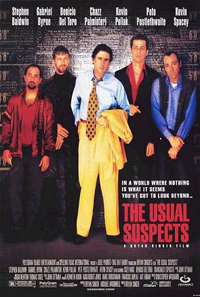 This is a film that you are going to be hearing a lot about in the coming months. Some would describe it as Reservoir Dogs meets House of Games, but I think that it belongs in its own unique category. The film is about a group of career criminals who get together to do a job that goes from bad to worse. Director Brian Singer gets excellent performances out of an ensemble cast featuring Kevin Spacey, Gabriel Byrne (in a role reminiscent of Millers Crossing), Kevin Pollack, Benicio del Toro, and a tolerable Stephen Baldwin (the young Baldwin who used to be in that horrible show Young Riders, which was a complete rip off of the equally forgettable Young Guns).

The dialogue in The Usual Suspects parallels the vernacular usually reserved for Hollywood Bad Boy and Mega Geek Quentin Tarantino. With a plot that unfolds like a pull out bed on a Levitz showroom floor, The Usual Suspects commands the audience’s full attention. Noir at its best is the only way to describe a film that rises above other recent noir films by Stephen Sodderberg and Hal Hartley. I wish I could tell you more about this film without ruining it, but I really can’t. Get out and see for yourself one of the best films of 1995. 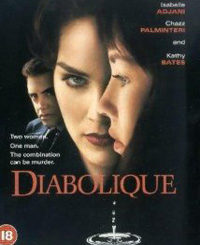 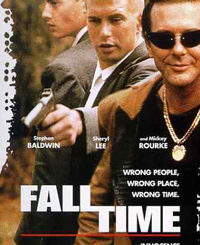