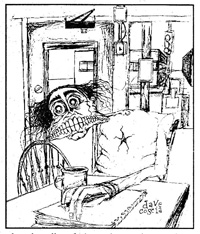 I was somewhere on the outskirts of my opening sentence when the drugs began to kick in. No, not really – just running out of interesting grabbers. Which is not to say that yours regretfully is coasting on inspirational fumes. Far from it. I’ve been working like a dog of late, which is to say that I’ve been sticking my head out of car windows quite a bit and have to wear a plastic cone around my head to keep from gnawing on my leg. But I have been keeping busy in other, more fruitful ways as well. Proof? Happy to oblige. Submitted for your perusal below are several pages from my personal, ultra-private journal (soon to be published in hardcover by Gutter Press), which I hope will give you some insight into the creative psyche and keep Scott from selling this space for a full-page ad for the PVC Hut (“Where the Budget-Minded Bondage Freak Shops”). Read and learn.

November 6, 2:46 AM – A trying day. No sooner had I completed the eight-page treatment for Disemboweling Ophelia, a tastefully-mounted snuff film inspired by the life of Edith Wharton (with the addition of several scenes of leggy dental hygienists having their epidermis scraped off with potato peelers – more a sort of Jane Austen touch, but I believe the critics will approve), and embarked on an irate missive to the editors of Pendulous Milk Gland-o-rama magazine, chiding them for their dreadfully incomprehensive arts section, when the electricity in my apartment went out. No doubt the unseemly pond lichens at the utility company had reacted unfavorably to my well-publicized stance on euthanasia (“never on federal holidays”), though I’m sure that they missed the irony in the crayon-smeared note I sent them, which read “You’ll get my money when the vultures pluck the dried mucus from my dead nostrils, you slump-shouldered, putty-buttocksed charlatans.” This, I fear, is what the true artist must face in this age of love beads and Nehru jacket-wearing beboppers. Or something like that. Even so, I refused to allow myself to be cowed by the darkness, pressing on with my vitriolic screed, until I realized that I had run well without the margins of my foolscap and was writing on the forehead of my houseboy, Virgil, who’d passed out beside my writing desk in a Lidocaine-and-throat-lozenge stupor. Livid, I terminated his employment immediately. (Suffice it to say there are still shards of his severance pay embedded in that skull of his.) Soon after, I was struck with a Beckettian sense of despair and had a prolonged crying fit, which I have recorded on my kerosene-powered DAT machine for inclusion on my forthcoming three-CD collection, The Anxiety of a Modern Flaubert, Volume One. Solitude envelops me like a very large envelope. Oh, well, time to go. Night-night.

November 7, 10:38 AM – I awoke this morning in a cold sweat. I had another intimation-of-mortality dream in the night. I was walking down the Champs-Elysees, looking for an open donut shop, when a pack of wild dogs appeared from out of nowhere and began tearing me limb from limb. Then the horrifying part: I realized no one was there to photograph it. I awoke screaming. Over a cup of very strong Ovaltine, I tried in vain to calm myself, but could not stop thinking of my misery, my loneliness, my bridgework. Virgil is gone. So is my longtime companion, Cheetah. And my illegitimate brother, Sliced. His absence is like a gaping void where once there was a void that didn’t gape nearly as much. I still regret the circumstances regarding his departure. I had taken him in after he’d squandered his life savings on sofa-sized art, but I wearied quickly of his constantly distracting me with his attention-getting epileptic seizures. So I contacted my friend at the Gedouttahere Travel Agency and sent him on the cut-rate Japanagram package tour, starting from Tokyo, with day stops in Kyoto, Okyto, Tkoyo, Yokot and Kooty. Last I heard, he had fallen in with a group of militant pacifists, who kidnapped and imprisoned him in an abandoned natural-food manufacturing plant, brutally refusing to beat and torture him. I would weep if I weren’t out of digital tape. Hopefully, I can set aside my pain long enough to finish my controversial piece on the Second World War, in which I suggest that the Nazis annexed Poland mostly for the sausage.

•When I die, I would like my ashes to be scattered in the barbeque pit of a prominent politician. Why not? Genius of my caliber can certainly help grill chicken effectively.

•I believe that the new trend for the next century will be phone celibacy.

•Experience has taught me that, while nothing beats a Bud, there are scores of innocent passersby who can easily be beaten with one.

•My philosophy can be summed up in three words: “Be kind – rewind.”

November 8, 11:46 PM – I had another vision tonight. In the midst of my three-hour hunger strike to protest the United States’ involvement with a waifish supermodel named Candy, God appeared to me in my linen closet, clad in flowing robes and a chartreuse dickey. He told me that, indeed, these are the Final Days prophesied in Scripture, that I should renounce all worldly possessions and retreat to the wilderness to wait for the sign of His return, and that the unrighteous will be consumed in a lake of fire, or, at the very least, have to share a sauna with Paul Prudhomme for eternity.

After a couple of drinks, He calmed down a little, and explained that He’s been suffering a lot of stress lately, what with His approval rating falling and the fact that His job has no room for advancement. I attempted to beseech Him, to ask Him questions about the nature of the universe and my place in it, but He was fairly loopy by this time, and kept mumbling about how His son won’t get a damn haircut. He stuck around for a couple of hours, then looked at his Rolex, said he had a trailer park to lay asunder with a tornado, borrowed 50 bucks from me for the weekend (“I’m good for it”), and disappeared. I must say, of all the deities I’ve hallucinated, He’s just about the rudest. True, He doesn’t have the bad manners of Buddha (you’d think he’d put a shirt on once in a while), but Krishna, now there’s a god. Stylish, personable, and endlessly entertaining – you should see him juggle. But God is just a disappointment all around – talk about a Messiah complex. I was so depressed that I deleted all the prepositions from the manuscript for my novel, Tropic of Emphysema, and am now going to drug myself into slumber with a palmful of extra-strength placebo. Anything to kill the pain. One thing I’ll never understand about pain is why it hurts so much.

November 9, time unknown – No entry today. Too depressed. Pimple on forehead. Out of Wheat Chex. Despair.

November 10, 4:58 PM – Today I have reached the nadir of the abyss. Where do I begin? First, my editor at Maxwell House called to say that he had pruned some of the extraneous passages from my epic novel, Inside Angel’s Cyst: A Love Story, cutting it from 2,347 pages to two paragraphs and a yogurt coupon. When I bemoaned his decision, he retorted, “What do you want from us, you fool? We’re not a publishing house. We manufacture coffee!” Further compounding the misery, I received a telegram from my brother in Ykoto, telling me that he had escaped the clutches of the pacifists by fashioning an AK-47 out of liquid soap, levelling it at his captors and threatening not to shoot them. He has fallen in love with the Orient, he says, and asked me to send him $5,000 by overnight mail so that he can get his eyes surgically slanted and change his name legally to Lo Fat. (He promised he’d keep the surname.) Still smarting from the fraternal blow, I opened the door to get some fresh air (the convenience store down the block has it on special this week), only to be greeted by representatives from the utility company, who had agreed to reach a compromise with me: they’d turn the electricity back on but confiscate all my outlets. Then my new houseboy arrived. Obviously, I had neglected to check into his background as thoroughly as I should have, for it seems I have hired a piece of ceiling tile. I hereby resolve to put more thought into the interview process from here on in. And to put the final nail in the coffin (to coin a phrase), God appeared again and told me that he ran into St. Francis of Assisi and had to pay off an old poker debt, so he wouldn’t be able to pay me back next week. What a deadbeat. That tears it. My creative well is dry. As soon as I finish this, I am going to burn all of my papers. I’ll never write anything worthwhile again. 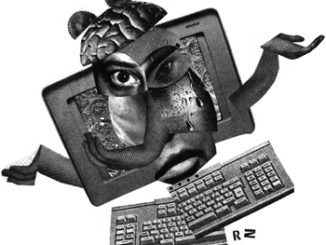 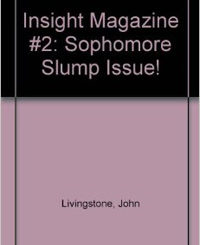 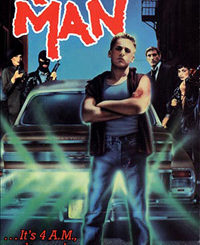