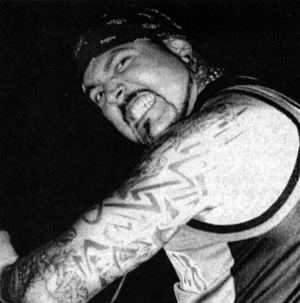 At a Biohazard show, you’re guaranteed to see a wide variety of tattoos. There wasn’t a lot of time to check out fans’ ink , however, because the first band, Hatebreed, began their set exactly on time. Hatebreed are kids from Connecticut whose young (! – as in, made me feel old) members play your basic ’90s hardcore. Songs like “Severed” and “Filth” obviously had some inspiration from Anal Cunt. “Conceived Through an Act of Violence” will appear on the new East Coast Assault CD. They were kinda like a pizza – really good, but after years of the same thing every day, even the biggest fan gets kinda bored. I was most impressed by the breeze that the stage divers provided; the club was very hot.

Half an hour later, Los Angeles-based DFL (Dead Fucking Last, not the Biohazard fan club bearing the same initials) went on – again, exactly on time! (In all my years of club-going, I’ve never seen one band start on time, let alone two!) DFL was awesome, yet the crowd had absolutely no response; they stood there as bored as if they were in class on the last day of school. Don’t let the glitter and daisies on the drum kit fool you – these guys know punk. From the old school, I heard definite influence of early (i.e., good) Suicidal Tendencies, none of this “Green Day Wants To Be the Sex Pistols” fluff. They were incredible, and I don’t know why the crowd didn’t share my glee. I would like to apologize to DFL, on behalf of the State of Connecticut, for the audience’s lack of enthusiasm.

Biohazard broke the “bands go on in a timely fashion” roll, going onstage about 45 minutes late. What can I say about the Biohazard set? Their Down For Life fans will tell you that if you’ve seen one Biohazard show, you’ve seen them all. But unlike Hatebreed, Biohazard is a band of which the fans never seem to tire. The lack of animation during DFL was but a memory as Biohazard rocked the crowd. With good reason; Biohazard always puts on a great live show, but now, with Rob on guitar, man, were they tight! Playing new material like “Gravity” and “A Lot To Learn” (the first single of Mata Leao) as well as ol’ crowd pleasers like “Across the Tracks” and “Skinny Song” made whirling dervishes out of the sleepers of half an hour before. Biohazard continues to make poetry of anger and expletives. As does Life. This is my fourteenth or so Biohazard show, and it won’t be my last. 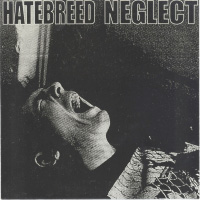