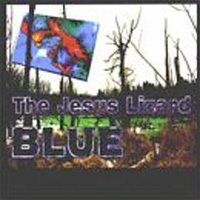 How, oh how, does a rabid rock band retain a shred o’ indie cred when their star is hitched to the marrow-sucking collosus of the multi-national music distributor? One easy way, which has gained increasing favor over the last few years, is to sell nothing and skulk back, triumphantly impoverished, to the indie label from whence they came. Another, more schizoid method, is to try and have it both ways: continue to issue major musical communiqués while getting your small-scale jollies on the side. It’s a little like an “open marriage,” and like that, nobody seems entirely comfortable when the subject is broached, whether out of deep-seated moral compunctions or the kind of secret envy which turns their limited-edition audiophile vinyl green. Such is the condition of The Jesus Lizard, for years the ultimate in alternate sources of power, only to suffer slings and arrows unimaginable when they signed onto the label the Knack recorded for (notably from former house producer Steve Albini, who damned them for their commercial doings, then turned around and produced Bush – the easiest irony I’ve managed today, thanks, Steve-o). So it’s come to pass that the Lizard, on the eve of their new Capitol release, Blue (hope they’re careful – between them and Foetus, there’s only so many four-letter, one-syllable album titles to go around), has attempted to go back to their old low-rent chippie (albeit a somewhat less used one than before) for a little one-EP-stand. Can they have it both ways? (Answer next paragraph.)

Their self-titled Jetset EP kicks in with “Cold Water,” a song with the rope-a-dope punch of old – the band is clenched-fist tight, with David Yow living up to the onomatopoeic implications of his stage name, spitting and howling his lyrics out like he’s doing his famed on-stage testicle trick live in the studio, and the two that follow – “Inflicted by Hounds” and “Eyesore” – are very much of a piece, reminiscent of their Touch & Go days, thanks to Andy (Gang of Four) Gill’s sympathetic, you’re-sitting-in-the-speaker-cone production. So far, so good. After that, they pull a weird: “Valentine” is a quiet, atmospheric instrumental in which David Wm. Sims’ bass and some uncredited keyboards, stereo effects, and a drum machine predominate. And “Needles For Teeth,” with John Cale at the boards and the omnipresent Jim O’Rourke remix, is slightly more aggressive but even more incongruous. It’s as if, in their quest for integrity, they forgot what reptile they’re supposed to be – suddenly, they’ve morphed from Lizard to Tortoise. Both “Cold Water” and “Needles” turn up on Blue as well, the former basically identical to the EP take and the latter unrecognizable in all but name. In this context, “Cold Water” is as bracing as its name, and easily the highlight – the remainder of Blue sticks mostly to pacing, mid-tempo seethes, with the layered sound one expects from a big-label big-money production, more gutter-funk syncopation in the rhythms, and Yow emitting a lot of drawn-out, melodic (for him) moans and few node-raising throat bursts. No bad songs to be found, but it mostly hews to the middle ground between the EP’s extremes, making this the first Jesus Lizard album that can be played as background music rather than grab you by the neck and commence shaking. While not an embarrassment either way, these two releases make good advertisements for musical monogamy. Don’t spread the love too thin, gents. And stop using protection. 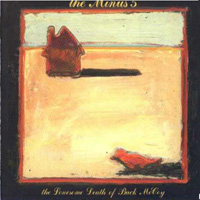 The Minus 5 – The Lonesome Death of Buck McCoy – Review 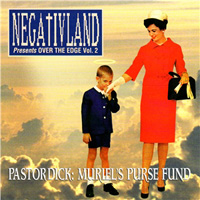 Negativland – Over the Edge, Vol. 2 – Review