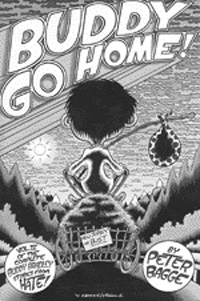 Now I want you kids to stay tuned. I’m off late February to San Francisco; where it all began. I’ll be doing research on what in the world is propping up such 50-something comix luminaries as Spain, S. Clay Wilson, Trina, Jay Kinney… and… uh, me… Clean Living? Stubbornness? St. John’s Wort? Sleeping late? Hey, something works…

One handsome book that I can recommend unequivocally is Buddy Go Home by Peter Bagge (Fantagraphics: 7563 Lake City Way NE, Seattle, WA 98115) This is Vol. 4 of the Buddy Bradley stories from Hate. Now, I haven’t seen a Hate in years but our Peter has grown right behind my back into a major cartoon humorist.

I’d label Bagge readily as an underground artist since he brings a sense of social outrage to his view of suburban life like his friend Crumb or Pekar or Matt. Further, he’s a terrific satirist with a real bite. Rather than just make fun of the Jersey ‘burbs which he has so nailed down though, he takes the high road and diminishes some of the characters and humanizes some others. Buddy’s mother and girlfriend, for instance, have real soul while his brother and his next-door neighbor are absolute empty bins.

Make no mistake, Peter Bagge is a very funny humorist with a sharp incisive eye; and this 122 page, 8 1/2″ X 11″, all-in-color for $16.95 is a glorious breakthrough in a funny, bright wit. There are, as in TV’s King of the Hill, well-honed characterizations going on in this bright, funny book.

The times are tough on the comic publishers. Slave Labor (979 S Bascom Ave., San Jose, CA 95128) sent me a xeroxed copy of one of their stories, “River of Shit” from the forthcoming X-ray Comics. “ROS” is a 14-page story about two guys who crash a frat party, drink other people’s beer and steal a dead pig… I suppose that the statement here is that it’s OK to steal beer and food from fraternities. All this in a tight, trim 14 pages… (not)…

I want to give special attention to friends at Starhead Comix (P.O. Box 30044, Seattle, WA 98103). They claim to be on the ropes, but they’ve been producing and selling u.g.’s for years. It’d be a shame to lose them. Their catalogue is probably a dollar and lists cartoonist collector cards, mini-comix, comix, actual antique Tijuana Bibles, T-Shirts, buttons, etc with an emphasis on the Pacific Northwest alternative comix scene. Twenty bucks goes a long way towards getting great American comic material. This’ll pick up your coffee table and assure you of looking kinked-out and wiggy to the opposite sex while your dumb roommate tries to get over with some new, crappy rock CD. Starhead is Clerks and Reservoir Dogs instead of Chasing Amy and Jackie Brown. 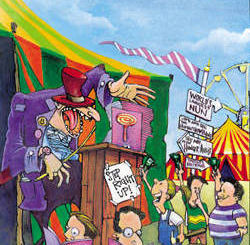