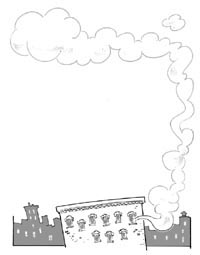 1998
I was sucking a headful of smoke as Jed pulled his face away to cough. That was when I remembered the pipe. It was clear glass with a rainbow painted on the bowl, and it had always sat on the shelf in the den. I don’t remember when I stopped seeing it. Jed got all excited when I asked him about it, and it wasn’t just the pot. Like me, Jed dredges up minutia from our past, and studies it like social science. “YES! Like, our parents had… the same one,” he said, his head jerking to the side, his eyebrows raising three, four times. “Or maybe…” there was a tense pause as his mouth twitched and his eyes widened three times in succession, “…it was like, communal.” He relaxed, then grinned, smoke coming out of his nose like a zany cosmic dragon. “What the hell happened to that?” he said thoughtfully, one eyebrow raised, his knuckle supporting his chin. “Ask!” I suggested. His mouth stretched to one side in a weird smile as his eyes widened a few times. “I don’t knoooooow,” he said in a low laugh.

June 16, 1969: Danae
“Windows open?” I asked, racing through the new apartment, making sure all the windows were actually up. “Yup, they’re open,” Eric called from the kitchen. I heard the clank of the grill pan rattling against the bottom of the sill. “I smell smoke!” I yelled as I ran back in. “Don’t worry! It’s all going out the window. The house isn’t going to burn down,” Eric smiled, and ran up to grab me around the waist as I came flying in, sure I’d find a massive torch of what were once our new curtains when I got there. As he went to kiss me, I reached around him, flipping the white ruffled ties away from the flaming hibachi. He was sure we could cook indoors on this thing. I was sure we’d be paying off fire damages for the remainder of our marriage. “Don’t worry!” he laughed, pulling me back by my tied-off shirt as I tried to fan the flames away from our little kitchen. I peered nervously over his shoulder at the four sizzling shish-ke-bobs billowing black ash out our window. “Come on, try to calm down,” Eric said, pulling me out of the kitchen. Reluctantly, I followed, then finally gave in and went with him into the den. He put on a Beatles album, turned down the lights, and said, “It’s still got a while to cook.” A few minutes went by and we relaxed. Then I heard a low whining sound. I pulled away from the sofa and started to get up. “The cat…” I started. He pulled me back, trying to quiet me, but soon even he couldn’t ignore it: it was getting louder, wailing, now there were men’s voices, tires… the police! Oh, my God! We were going to be arrested!

1998
“Hooooly shit, you are so wrooooong,” Jed grinned, smoke puffing out his nose in silent snickers.

“What? How am I wrong?” I asked, surprised to be challenged and annoyed that the bowl had bypassed me this round.

“You just…” his eyebrows went up twice, he sniffed, “have no clue. I mean, that’s just wrong.”

“You mean that our parents cooked indoors is wrong? As in, it’s bad?” There was a pause as he tilted his head up and blew a few smoke rings.

“No.” Another pause. “You have the story wrong.”

1969: Francine
My brain was so full of smoke I thought I was going to pop. When I looked at Danae, her eyes were bugged out, and that made me start laughing. That made smoke start popping out of my nose and mouth, and Grant and Eric went berserk, laughing and rolling all over the floor. Danae was too far gone to even notice. She just breathed out really slow, like that caterpillar in Alice in Wonderland, and that made me laugh even harder. So everyone except Danae was cracking up, and then Danae said, “Whhhuuuuut?” and I snorted really loud. And then Grant yelled, “FRAN-cine,” like he always does when he’s annoyed because I did something really stupid, and I jumped up and ran to pee because I was laughing so hard I thought I might make on the floor. So I ran to the toilet, and plunked myself down on the seat, and then while I was peeing, I looked out the window and noticed that there was smoke coming out of our kitchen window. And I was like, “Ooh! Oh no! Fire!” But I was peeing, so there was nothing I could do. And I was yelling, “Grant! Eric! Grant! Danae! Fire!” But I was laughing too, and I was peeing, so I couldn’t go anywhere and I couldn’t hear them if they were yelling back. So I wiped as fast as I could and tripped over my pants because I forgot to pull them up, and then just as I was pulling the bathroom door open, I heard the sirens. And I went, “Oh, doodie.”

1998
“That’s not how I was told it at all,” I said, looking at Jed suspiciously. Jed laughed long and low, his eyebrows hopping up and down as smoke came out of his Cheshire grin.

“Fine, tell me your mom’s version,” he said.

1969: Danae
I shoved Eric aside and grabbed the flaming hibachi from the windowsill, throwing it into the sink and turning on the water. Wait, are you supposed to put water on kitchen fires? Shit! I grabbed the entire unopened bag of flour and threw that on it. Wait, that’s for electrical fires! No, oil fires. Is this oil? Oh shit…

The sirens wailed up to our door and clicked off. I heard car doors slam and walkie talkies bleeping and barking. I yanked the hibachi from the sink and threw it under the sink, my hands shaking so hard that I slammed the thing into the sink wall three times before making it into the garbage. “Oh my God, oh my God, we’re going to jail,” I cried as Eric tried to say something about it not being a big deal. I winged around and shouted in his face. “It is too a big deal! I knew the hibachi was a bad idea! I knew it wasn’t legal! Now we’re going to jail! And we’ll lose the house! And they’ll take the hibachi! And there won’t be any dinner, and there aren’t any toilet stalls in jail and everyone will see me when I pee!” I screamed. Eric was trying to calm my wildly flailing fists when we heard the knock on the door.

1998
“You think all that hubbub was about a fucking hibachi?” Jed chuckled.

1969: Francine
I went flying out of the bathroom with my pants falling down and toilet paper stuck to my shoe. And when I got to the living room, Danae, who’d been completely cool when I left, was freaking out, and Eric and Grant were trying to talk her down. She was running in circles around the room waving the pipe, yelling, “Turn ourselves in! Have to turn ourselves in or they’ll give us the max! Turn ourselves in!” And then we all started chasing her, and we heard a loud knock, and she pulled away from us and flew to the door with the pipe waving around and all the ash falling out on her head, and we couldn’t catch her until she grabbed the front door and pulled it open.

“Nooo, this is too funny. What did your mom tell you?” smiled Jed.

1969: Danae
So I heard the knock, and I took a deep breath, walked to the door, and opened it.

1969: Francine
So right as the door swung open, I jumped up behind Danae and I yelled, “Oh look, it’s John Lennon!” And I leapt to grab the pipe when she turned to say, “Where?” but I missed it. And then all these policemen came racing into the hallway at once, like something out of Gangbusters, and I had to pee again right away, and I went, “Ooh! Ooh! Ooh!” and Grant went, “FRAN-cine!” And we all stood there with pot smoke booming out of the apartment in big gusts and our eyes all bugging out and the pipe in Danae’s hand and eight cops came running straight in and Grant said, “Officer, we didn’t…” and the cop pushed Grant away, saying, “Later, kid,” and ran right past us into the connecting apartment.

1969 Danae
And when I opened the door, all these policemen came running in and Eric ran up and said, “Officer, we never tried a hibachi before…” and the policeman shoved him aside! The officer said, “Later, kid,” and ran right past us into the next apartment.

1969 Danae
It turned out our next door neighbor was holding his wife and daughter at gunpoint.

1969 Francine
We could have all been killed!

1969 Danae
And I’d thought we were getting arrested for illegal use of a shish-ke-bob.

1969 Danae
So that’s why you should never cook indoors on a hibachi.

1998
“Didn’t you ever wonder why your parents and mine are always like, ‘Hey, let’s cook on the hibachi now! You kids go out for dinner.’ And they give us money and like send us out,” mused Jed.

“Okay, maybe not.” Jed took another drag. “But I really wonder what happened to that bowl.” 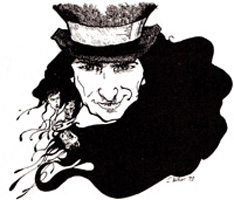