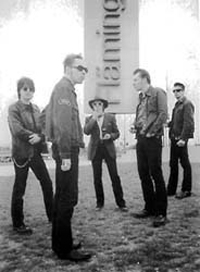 Who really cares about rock music these days? Nobody really cool does, so say most of the media outlets, anyway. Rock’s for suckers and washed-out junkies, for losers, for foreigners, f’chrissakes! It ain’t nothin’ but pre-teen toilet-training fake rebellion, something best practiced by cretins who don’t know any better who, in turn, get aped by assorted Europeans and pariah Asians who learned American culture from sitcom re-runs. All considered, rock’n’roll should be met with the same chuckles that greet Wesley Williss (it takes a real person of integrity like Jello Biafra to exploit the talents of the mentally retarded with a straight face, uh huh).

As we turn the numbers on this memorable century (er, millennium, let us not forget), Kid Rock‘n’Limp Bizkit make up the rock’n’roll experience for most of the fucking population, or, if yer really hip, yer standard bearers are goofy-ass tourists like the Hellacopters and Guitar Wolf. Wired-in Generation unite (and go fuck yourself)! Us writers, the (ha) intelligentsia (I’ll only speak for myself and thus not run the risk of insulting anyone), with record collections inching toward completism (as long as it was released pre-arbitrary date), we sit and alternately complain that nothin’s goin’ on and then hold up some throw-back as the best hope for good music since the Heartbreakers wisely decided to split this country and then hock said throw-back’s masterpiece for trade towards yet another Stooges bootleg. Fuck it, who really cares anyway? 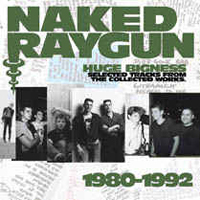 So, is there anything going on? Well, hell, this might be the worst place to find out. Do I know anything beyond what I don’t like? I’ve listened to more lousy bands in the Year of Our Lord 1999 than most people I know will listen to in a lifetime, and I still find the occasional tingle that keeps me from just walking away and closing up the whole shop. Never mind that most of the stuff I listen to regularly was released before I was even born.

Best cheap thrill I got recently was in the form of a teaser sampler (Huge Bigness) from Quaterstick Records (PO Box 25342 Chicago, IL 60625). Wouldn’t ya know they went and re-released the goddamn Naked Raygun back catalogue! That ain’t gonna mean much to most folks, as their whoo oohh ohh oh oh swan song, Raygun… Naked Raygun was released damn near a decade ago (first one dates all the way back to 1983, yup). Loud guitars, a singer who actually used his vocal chords for something other than shouting, precision timing, power, rage, balls. Forgive the fogy tendencies, but that was punk rock, kids. Raygun’s All Rise LP still gets regular wear and tear aside assorted Stones, Dolls, Ramones, Clash, Lyres and Headcoats chestnuts which pass for leisure music at my house. 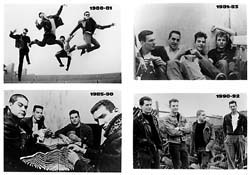 Although nothing much touches that stuff, Albuquerque, New Mexico’s on-again off-again Drags come real close to a past/present/future Best Rock Band on the Planet. Rumors of their most recent demise have been scotched by some SouthWest acquaintances who swear that C.J. and Lorca have hooked up with yet another drummer and added a second guitarist (giving busy guy C.J. much more freedom to yell and kick people, I guess). The Drags are gigging, too, as I understand. Haven’t heard about new stuff being released, but their label of the moment, Seattle indie eMpTy (Po Box 12034 Seattle, WA 98102 www.empty-records.com), is sure to make all of us losers happy with a CD compilation called 45X3 which consists of most of the band’s difficult-to-find and oft-outta-print 7-inch singles. “I Like To Die” is here (twice, actually), “My Girlfriends in the FBI,” non-Estrus LP versions of “Conspiracy” and “Iron Curtain Rock,” plus covers of the Pagans‘ (pre-punk Cleveland punk rockers who have a comp of their own floating around out there) “Six and Change,” the Pretty Things‘ (who are back together with a new record that doesn’t totally suck like the Stones’ product of the past twenty years or so) “Well Worth Talking About,” Crime‘s “Baby, You’re So Repulsive” and Billy Lee Riley‘s psycho-hillbilly classic, “Flying Saucer Rock’n’Roll.” All a that and more, all in one package for your shopping convenience. Hell, it may even be available via MP3, so you can just download it and not even haveta leave yer mom’s basement. 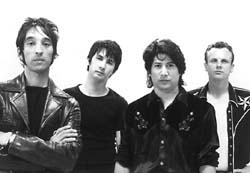 Yeah, so the new age rings in, and thankfully no one’s gonna ask me for the band or record of the past 1000 years (there’s this radio station out here in Portland that was running this idiotic poll re “Artist of the Millennium.” They advertised the balloting in the freebie local weekly, complete with photos of possible candidates and, ya know what? Every last fuckin’ one of ’em appeared on the scene in the past fifty years. Why not call it “Artist of the Past Half Century”? I mean, sticking Sinatra or the Beatles up against Western cultural development since Leif Ericson ran his longboat into Canada, well, that’s downright goofy, don’t ya think?).

God help the prognosticators, ya know, but I’m thinkin’ the best consistent shit for the past couple years and thus top fuckin’ seed for the coming decade has come out courtesy of Junk Records (7071 Warner Ave F-736 Huntington Beach, CA 92647 www.junkrecords.com). The label’s founders, Katon DePenna and Lou Caros’ve recently undergone a sorta nasty (and quasi public) split over the “direction of the label,” but hopefully, that’s just gonna be a vision-thing clarifier. Lou’s keeping the label going and recent releases have included the Dragons‘ ultra brilliant heart-on-sleeve-but-balls-intact Rock Like Fuck (R*L*F* for family publications) and the Weaklings‘ Just the Way We Like It, which is far and away the best thing ever done by a band where constant members Bradley and Mark’s commitments to rock’n’roll are matched only by the sheer will it’s taken to hold the damn band together. I guess there’s also new stuff from Seattle’s RC5, Vancouver B.C.’s incredible Spitfires and fellow Canucks, Jet Set (who blew me away at a Junk label showcase last summer with their, yeah, gritty, messy punk, maybe you thought they were all about hip-hop) and hopefully Portland’s New Wave Hookers can rebound after a member was caught at the Canadian border with fraudulent ID papers and deported back to his native Japan (We’ll miss you, Hiro, number-one punk rock American style!). Also, don’t count out Mr. DePenna and his new Black Devil label’s ability to blast your eardrums, insult certain members of yer family by peddling records with near pornographic cover photos, and otherwise piss off anyone and everyone within the reach of the closest telephone (that’s Katon’s style, natch). 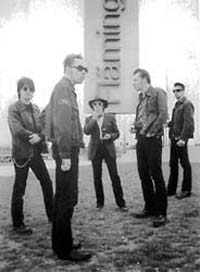 There’s a Scandinvasion of sorts, too, with the Hellacopters and Turbonegro in the vanguard and the Nomads (from Sweden), the Tremolo Beer Gut and the Burnouts (both Danish bands) poised to rock and pillage if this Bad Afro (Poste Restante, Frederiksberg Allé 6, DK-1820 Frederiksberg, Denmark www.vow.dk/badafro) comp I’ve got, Pushing Scandinavian Rock to the Man!, is any indication. All of the above vikings and more show up, Hellacopters contributing a Sabbith ized cover of Iggy‘s “I Got A Right” and Turbonegro stoning out on Bowie‘s “Suffragette City.” Finland’s Flaming Sideburns also show up with one of their best tunes, making a better second impression than the first un I got from those guys. Obviously, there’s hope for anyone. Shit, I feel all warm and sunshiny all of a sudden. What’s up with that? Oh well, until next time, don’t go making toast in the shower. 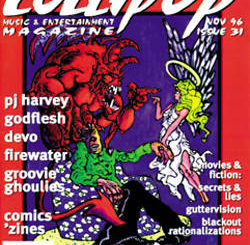