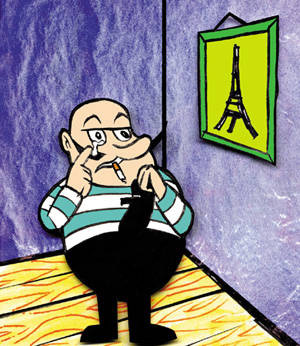 Written by Jean-Paul Bavard, Music, Film, Theater, and Fashion Critic
Translated From the French by Daniel Davis
Illustration by Ans

Breath
(4 Stars out of 5)
Along with such glamorous divas as the brilliant Sheena Twain and Lee Ann Busta Rhymes, country music supergroup Faith Hill has brought style, fashion and class to country hillbilly music. Dispensing with such anachronistic traditions as the peddle steel guitar, twangy vocalisations, innovative songwriting, and emotion, and replacing them instead with cutting-edge advancements such as glamour, fashion, and background dancers, these immensely popular artists have redefined the entire countywestern music genre. Perhaps the hottest band in the universe, Faith Hill has une brand-new release entitled Breath that continues this revolutionary redefinition, helping to make countrywestern music the choice of those people who do not enjoy listening to music. Breath‘s synthesized beats, bouncy, perky tunes and processed vocals replace the tres irritating grit and passion that mars so much of the hillbilly music of overrated cowboy men such as Hank Willems, Johnnie Cash and Merle Hagar. Faith Hill’s work has now eclipsed them, and brought hillbilly redneck music to the disco floor, the elevator, and the vehicle du sport-utilitie, where I boldly predict it shall stay forever and ever more.

European Nation
(63 Thumbs up out of 100)
Belgium est une small, twitchy, densely-populated nation of some 10 million inhabitants located at the crossroads of Western Europe. Its capital, Brussels, is also the capital of the l’Union European. It is a federal state, with three relatively autonomous areas: Flanders of the north, where the language is Flemish; Wallonia of the south, where the language is French; and the centrally localised Brussels, which is officially bilingual. Bounded on the northwest by the North Sea, on the north and northeast by The Netherlands, on the east by Germany, on the southeast by Luxembourg, and on the southwest and west by France, it is often overlooked and ignored by travelers with someplace interesting to go. Culturally, Belgium is an heterogeneous nation straddling proudly at the border between the Romance and Germanic language families of Western Europe. The rich history of Belgium led to the churches, the pizza shops, the castles and the impressive works of art spread through the cities (and also the countryside, but less so). Belgium probably has the quality of the highest life in the world, as testified by its tres excellente plumbing, housing, postal, waffle and laundry facilities; its tendencies to high productivity, low poverty, and frequent illnesses amongst workers; and the appreciation from des expatriates residing in Belgium. But alas, Belgium loses points due to the fact that many of the native residents tend to one extreme or the other: either gratingly irritating or crushingly boring.

Frampton Comes Alive
(@@@1/2)
This double-Disque Compacte, recorded live in concert, spans the career of British indie cult favorite Pierre Frampton, showcasing the work very full of melody guitar and tunesmithery. But in spite of the force of its blows of axe musicale, it passed function as something unto the grace of a lightweight thing, due to its incursions into songs sentimentale and acoustics of love. The album does show the two sides of Frampton’s musical personae, the Crooner and the Tumbler, and does it in une configuration charged with great energy. Recorded mainly in Plattsburgh, New York, and also in the comfortable borders of the legendary San Francisco Hinterland Colosseum, the noise the terribly British Frampton describes on songs like “Something Which Occurs” and “I Wanna Go Into the Sun” is unmistakably his own. The principal concepte de Frampton clearly comes, though, in the songs where the generally soft approach of the lyrics melds with a friendly axe riff, as in the blows of the monster “Show Me The Route” and the “Baby, I Love Your Route.” But a great song of noise is always a great song of noise. This album is a piece of work, which manages to be brilliant and hardware-rocking of not only one feature, and it is most probably the best thing than it is ever recorded by this singing man called Frampton. And it came alive.

Art movement
(Thumbs down)
Abstract Expressionism is marked by an attention to external qualities, tracing and texture; the use of the enormous fabrics; the harnessing of accidents that occur while painting; and the glorification of the act of painting itself. The first significant school in American painting to declare the independence of the European models and to influence art abroad, Abstract Expressionism particularly has enormously affected the kinds of art which followed it, in the use of color and the hardware. The principal artists in the movement include Sydney Pollock, Franz Kline, Willem DeFoe, and Marx Rothko. The genius of this Art Movement was, of course, the rejection of social realism and geometric abstraction; i.e., expressing ideas and experiments intangible, rather than simply copying nature. As the genius Marx Rothko once claimed, “art is not about an experiment, but is the experiment itself.” Abstract Expressionism has proven to be a vastly important and deeply influential movement in Art, but also irritatingly messy, with much splattering and spattering, and the smearing and the smudging.

Hot Chocolate and the Starface Water
(AAAA1/2)
Ibiza is the place to be this year, as simply everyone knows: take what are obviously by far the best clubs and DJs in the world; add a tres cosmopolitan mix of clubbers and holiday-makers bent on having it all; and then throw in some stars, celebrities and Supermodels for good measure; and what do you get? Simply the most fashionable and hottest holiday destination on the entire Mediterranean, with the most exclusive club scene anywhere in the world. Although Pacha and El Divino are open at the weekends in winter, the real clubbing season starts around the beginning of June, and continues on until the last week in September. The Foam party at Amnesia must be experienced to be believed. But for me, Ibiza will always mean one thing: the lovely and fabulous Ms. Gloria Gaynor, with whom I shared many special times on Ibiza, in the nightclubs, at fabulous parties, and alone together on the simply gorgeous beaches.

No Stings Attacked
(C+ stars out of 7)
The third album of In Sync finds the group attempting to direct the sensitive ground between the viscous noise regularly envisaged by superstars of the boy-type, and the vaguely edgier sort of the hip-hop which will probably make it possible pour le group to have une future commercial, once the mania of the adolescence of noise goes the way of all the flesh. Verily, no character string joined, it merrily careens between the love songs of soft-hearth and tracks of the tape, the third of which excavate further into the fertile terrain of hardcore hip-hop than the majority of the tapes of which boys would dare to go. In Sync surprises us with its clean, awkward newfound confidence in hip-hop, the groove of which is an assertion of independence (the title, obviously, plays to more than the recent troubles of the label of the group). Indeed, the lead single, the autobiographical and confessional “Bi, Bi, Bi,” startles with its audacity and tunelessnacity. However, given the current commercial preeminence of the kind, it does not come out exactly as intended. None the more routine tracks seems in particular self-assured. In fact, one of them, the Left-Eye-guesting “Cowboy of Space (Hippie-Yi-Yay),” is as dire and woeful as its title suggests. There are some tracks upon this Disque Compacte which approach the parodical, the effect of which is healthy in abundance, which suggest that there is very little of tendency that the boys do not milk like farmhands. In addition to their tight trousers, the boys have sensitive sides, with les voices mellifluous, which drain like honey. The instrumentation here is not much more than only programmed beats of noise built for the optimum pelvic push. Yet often, the vocals are slight and thin, and the lyrics find almost always the break-hearted scenario, or on the edge therein, including the simple “Bi, Bi, Bi,” which attempts to work hard for winsomnosity and flirtalitatiousness, and succeeds. Sometimes.

All That You Can Eat
(0.3487 stars out of 0.5633)
The Welsh super stars rockers U2 have long established themselves as une force to be reckoned against for well over a decade now, authoratizing such indescribably popular hits as “I Shall Swallow,” “Name (In The Pride of Love)” and “Bullet the Blues Guy.” Their many peppy and uplifting tunes have served as une veritable soundtrack to the events in the lives of many people in various locations throughout the known world, several of them even fabulous celebrities, such as Anthony Michael Hall, Tom Brokaw and Demi Moore. Their newest release, All That You Can Eat, has been universally acclaimed by friends and foes alike as by far the most recent recording that they have issued to the general public at large in return for payment. Wild pre-release rumors and speculation that the album would include various differing tracks of music that U2 themselves recorded and performed are impossible to verify at press time, but it remains to be seen whether or not this release will be the smash commercial and artistic comeback hit that the band has obviously been hoping for, or instead a crushing critical and poor-selling disappointment to the group themselves, as well as their ardent base of fans. If there is one true thing that may be stated in cases such as this, it is that only time will tell.

Songs for Betty
(D-)
Critically acclaimed Trance/Jungle turntablists Star Hustler have established themselves as perhaps les premiere expert practitioners of Neo-Ambient Trip-hop/Homo-core/Deep House/New Romanticism in the entire burgeoning mid-central outer North Dorchester music scene. Such words of praise are not given lightly, and much is expected of these standard-barriers of such an important movement in the contemporary music. Which is why their newest releasement, Songs For Betty, is such an indescribably horrific disappointment. Painfully lacking any dope beats, phat samples, trance-heavy synth programming, or silky-smooth rapping whatsoever, Songs For Betty instead tries to furtively sneak by with catchy guitar-based songwriting and pop hooks, as well as the underprocessed vocals of transsexual frontman Jason Hetfield (perhaps best known as the militant vegan/anarchist brother of International Pop Superstar Kirsten Hersch, the former leader of famed indie rock Legends and Cult Heroes the Belly Baby Breeders). Perhaps insanely jealous of the fame and beauty of his much, much more popular sibling, Hetfield spends most of Songs For Betty spewing venomous, libelous and acrimonious attacks at various beloved religious leaders, imaginary alien invaders, and firefighters. It all is for naught, alas, as the total lack of sampling, drum machines and effects, combined with a beat-per-minute-rate of well under 100 renders Songs For Betty as perhaps the most disappointing, if not the worst, worst electronica album of the decade. 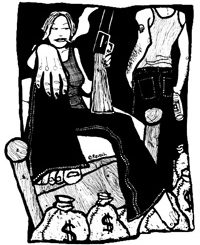 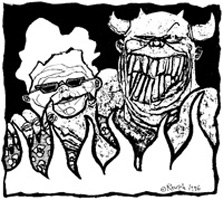