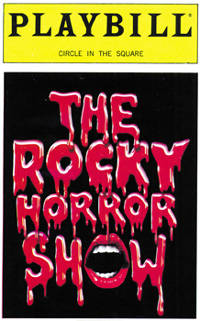 Live at Circle in the Square Theatre, Broadway
by Jamie Kiffel

Want a shock? See The Rocky Horror Show Live. The shock is that even well-used Rocky philes will come out frizzed to the loins. Choreographed down to the synchronized twitch, blocked like Hieronymous Bosch, and costumed like a circus visionary, this Rocky has all the stops pulled out.

Muscularly-lipsticked actor Tom Hewitt butches and babes-up Frank ‘N’ Furter to the hilt. With a blonde buzz cut that shines like razors, he doesn’t just seduce – he wriggles in a gaggle of gorgeous, pale Goth boys who do sensuous splits in spiky black vinyl and boots; he gives it to both Brad and Janet from behind before triumphantly snapping off used condoms and tossing them over his head, and collapses only after landing in a final 69 with Rocky. All the power, surprise and thrill of the original show has been electrified like a sex shop rewired for the millennium. 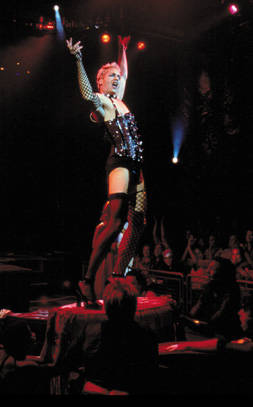 The set seems to pulsate even when bare. The red-curtained walls bulge in the shapes of human bodies. The audience looks down on the set from a deep, plush fishbowl of seats, at the center of which a catwalk leads straight to a gloriously lit proscenium and movie screen. The completely electronic set, which later turns, flips over, rises and breaks away to become a technologically crazed laboratory of wheels, ropes and turning vials, looks like a mouth with its runway tongue lolling out. This is a sci-fi obsessor’s wet dream realized.

Above it all perches The Narrator, played by none other than Dick Cavett. Heckle Dick, and he’ll send it right back at you. In response to someone shouting the classic Rocky call-back, “You have no neck!” he responded brightly, “I’ll bitch-slap you to the curb.” Where else can you hear Dick say that? 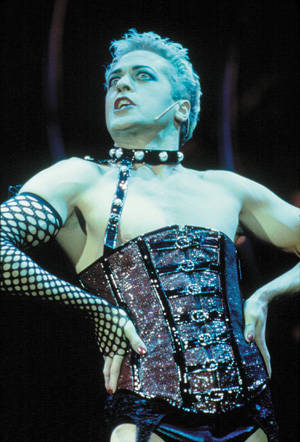 Things get natty right from the opening theme, “Science Fiction, Double-Feature.” The song is lusted out by Magenta (Daphne Rubin-Vega, who played Mimi in Rent) in her boob-boosting cigarette girl minidress, and by the fabulously bald and butch Columbia, portrayed by the original ratty sex rocker, Joan Jett. Crotch-feeling, tongue-sharing and body-rubbing spreads over the stage, lasciviously lit by purple and red gels. Then the movie screen – behind which the band rocks with huge, vein-vibrating chords – flicks on in black and white, and our vision is filled with a film of our heroes, Brad Majors (Jarrod Emick) and Janet Weiss (Alice Ripley). In a miraculously choreographed moment, the living and breathing actors step off the edge of the screen and right onto the stage, giving the illusion that the movie has come to life. The screen trick is a perfect metaphor for the show itself, breathing brighter and larger than the movie ever did.

Brad and Janet are anything but two ordinary teenage kids, however. They have fantastically built bodies just bursting to tempt a sweet transvestite. And tempt – and satisfy – they do. Guitars and drums fill the room as Riff Raff (Raúl Esparza), looking like Robert Smith rubbed the wrong way into a sexy snit, roars “The Time Warp” and whips the audience into crazed hoots and shouts, admired by a lusciously eager Janet. Goth boys and girls ooze into the crowd and pull them up to undulate onstage as the innocent couple drop their inhibitions (and outfits) one by one. 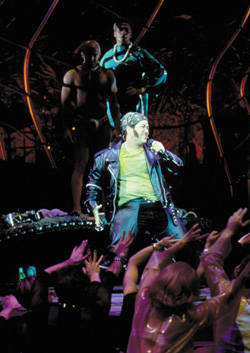 All the action happens hotter and faster than in the film, as the impossibly well-built Rocky (Seabstian LaCause) bursts on, strapped into a G-string and tied to a hoop hanging from the ceiling. Following a trend of script tweaks that modernize and streamline the story, Rocky petulantly rejects his first birthday gift – Tinky-Winky, the purportedly gay Teletubby. Then Eddie (Lea Delaria) rushes out to belt “Whatever Happened to Saturday Night?”, explore Joan Jett’s mouth with her own, and get quartered by Frank’s glitter-bathed chainsaw. Amidst devious plotting by the evil Transylvanians, Frank gives Brad a noisy blowjob, Dr. Scott (also Lea Delaria) manipulates his gloved hand like a satisfyingly deranged mime, and Frank heads his “floor show” in a Faye Ray dress as the company busts a synchronized move in gold and red boas. 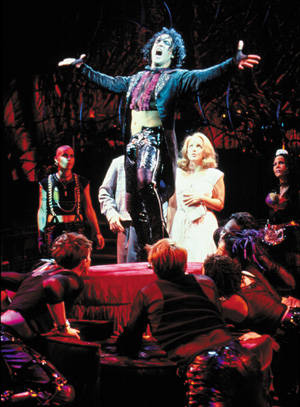 As if it needed it, the show gets an extra injection of power from the “audience participation bags” which are available for $10 at the door, and worth the investment. Each comes with an obscenely long, red feather boa and more props to help you indulge your fantasies throughout the show. There’s a newspaper to hold over your head while Janet and Brad walk through the rain; a flashlight to add that inimitable “Freebird” sea of sparks flicking on like electric starlight when the couple sing “there’s a light”; confetti to toss at Rocky’s birthday and in your neighbors’ hair; toilet paper to throw at Dr. Scott; playing cards (“for sorrow, cards for pain”), and rose-colored glasses for Frank’s “rose-tinted” world.

The energy is relentless, and I came out with a head full of confetti and plenty of sweat. There’s something fantastically freeing about screaming at live actors (“Slut! Asshole!”), and throwing things at them, too. Don’t dream it, be it. Give it up to the best Broadway rock’n’roll shock sex show I’ve seen “in a veddy long time.”

Gillyis Thunderhead – with Sam Black Church at The Underground – Review