A Tribute to Turbonegro (Hopeless)
by Jon Sarre

Turbonegro, in all actuality, no joke, yes, really, may be the most influential “underground” or whateveryawannacallit band of the 1990s. Tho’ there’s naysayers like Mick Altamont out there who maintain they only existed for “stupid twenty-eight year-old punk rockers” so they could connect with the ’70s arena rock they missed out on (but Mick, I’m twenty-nine), it seems like everyone I know owns at least a copy of Darkness Forever (includin’ this girl I ended up in bed with, so I threw it on to see what it would be like to fuck to Turbonegro, but then we decided it wasn’t compatible with heterosexual coupling). Three years after the band called it quits, the Turbojugend is still growin’, and that’s a testament to somethin”, seein’ as most rock bands can’t ever get anyone to care they’re around.

Carin’ mucho on this 26-song tribute are a pretty diverse buncha artists (which fits cuz Turbonegro were pretty fuckin’, uh, diverse themselves), tho’ personally I woulda locked out the non-rock artists just cuz it breaks up the flow to hear an industroGoth butcherin’ of “Rendezvous With Anus” (the HIM track) between Queens of the Stone Age rockin’ out “Back to Dungaree High” and Black-metal-but-it’s-still-metal-so-I-guess-it’s-okay Satyricon doin’ “I Got Erection” (and it’s kinda scary the way they do it, but it’s Black-metal’n’all, so I guess it’s supposed to be that way), but Alpha Motherfuckers‘ all still pretty fun cuz ya can see what people come up with when confronted with the task of “interpreting” Turbonegro. Ya got real good stuff from  Queens of the Stone Age (best track on the comp: A fast’n’outta breath kilterless “Selfdestructo Bust”), Supersuckers doin’ “Get It On,” like it was made for their twin Les Paul attack.

Amulet makes me think they were The Candy Snatchers on “Hate the Kids” (I even hadta double-check the track listin’s). Ya also got Hot Water Music hardcorin’ “Prince of the Rodeo,” Scott Free pullin’ off a note-for-note “Rock Against Ass,” Griffin doin’ a balldraggin’ “Bad Mongo,” and Zeke and Nashville Pussy fuckin’ up their turns at bat (“Midnight Nambla” & “Age of Pamparius” respectively – they shoulda done like Motosierra, whose version of “Hobbit Motherfuckers” out-Motörheads ’em both). Then Motorpsycho‘s seemed-like-a-good-idea-at-the-time loungy “He’s a Grungewhore” goes on way too long, but ADZ‘s “Good Head” is pretty fuckin’ cool, likewise Dwarves‘ (with Splittin Wix) “Hobbit Motherfuckers” (what again?) and Puffball‘s “Zonked Out On Hashish.” That ain’t even the whole lineup here, tho’ it’s most worth mentionin’, but ya also got Real McKenzies and Therapy? amongst a buncha others comin’ out as Turbojugend and they’d all agree like Dwarves’ HEWHOCANNOTBENAMED gets to say in the notes, “Long Live the Apocalypse Dudes!” Other Denim Demons: Bela B. & Denim Girl, Maryslim, Nullskattenylterne, Peepshows, Spacebitch, Samesugas, Ratos De Porao, Toby Dammit.
(PO Box 7495 Van Nuys, CA 91409) 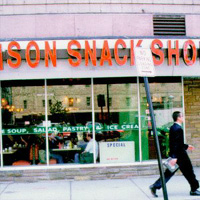 Seam – The Pace is Glacial – Review 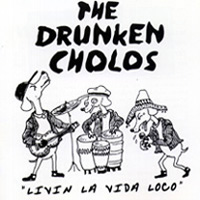 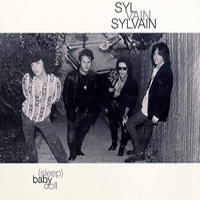