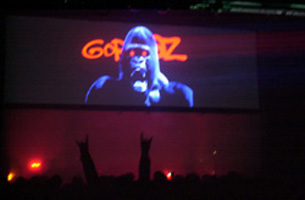 at Avalon
by Lex Marburger

The anticipation was a turn-on. What the hell was a fake band gonna do when asked to put on a show? I don’t think anyone expected Gorillaz to be a hit. I mean, mix Brit-pop, hip-hop, and reggae. Bake and serve. “Clint Eastwood” is a great song, but I thought I was the only one who thought so. Imagine my surprise when the show sold out almost immediately. Wonders never cease. What next, Avalon doesn’t give me shit at the door? Actually, yes… and with a balcony pass, no less! 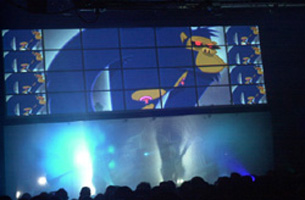 So, down to tacks. Back in the ’80s, Public Image Limited tried playing a show from behind a screen, claiming that the music was more important than the band. The crowd threw chairs at the stage until the screen crashed down. This was at the front of my brain as I wondered what Gorillaz was gonna be up to down there. And wouldn’t you know it, there was indeed a screen across the stage. No chairs around, tho’. So this was how they were gonna run it… I had kinda imagined cut-outs attached to remote-controlled cars that were driving all over the stage. But hell no. They had the money to go high tech. Introduced by that weasely fuck Nik Carter, the screen lit up, split-screen style. The upper half had video projections courtesy of the Tank Girl guy. Gorillaz in action! The lower half had silhouettes back-lit from different angles, the shapes of Gorillaz flickering about. And somewhere in the midst (get it? Gorillaz in the midst? Ah, fuck off), the actual players were creeping about. Surprisingly, even with Dan the Automator lurking about, all the instruments were live (especially Russell the drummer. How weird is that concept: A fake drummer that doesn’t exist in the first place. Go figure). 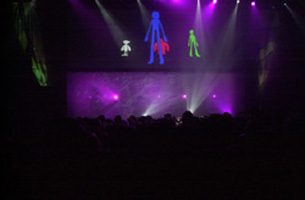 So what did they play? The album, pretty much. I mean, they only have 13 songs or so. What I did notice, though, is that they sounded much better than most bands I’ve seen at Avalon. Must be the screen. I mean, you can set all the instruments up so they sound the best, not bothering with how it will look onstage, and the players (you know, the Blur guy, the Cibbo Matto chick, etc.) are undoubtedly much more relaxed. No one can see you, you can hang out, walk around, make faces… Anyway, in between songs, the upper half of the screen would play a 30-second short, featuring the Gorillaz crew.

And it struck me: Gorillaz are much more entertaining than other live bands cuz you can do so much more with a cartoon. I mean, talk about larger than life… A fake band gives you so much freedom. You can make shit up as you go along, create long, looping backstories, and basically do the impossible. This, my friends, is 21st-century entertainment. I mean, come on… This is a multimedia handjob here. Funny, the crowd didn’t seem to be that into it. I guess the joke’s on them. The ones in front obviously couldn’t get the whole view, this show was for the people in the back. And the balcony, of course. But I didn’t really notice anyone dancing. They mostly looked confused. And I love it. Cheers to you, Gorillaz. You’ve made an old, jaded sonofabitch very happy. 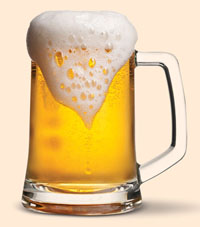 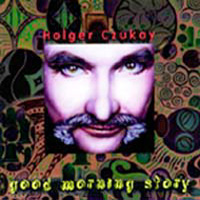 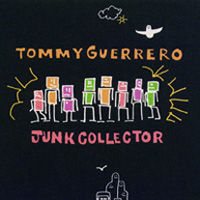