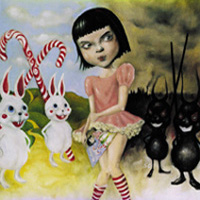 Always liked this cover artist’s stuff. The artist who did the cover, I mean, not the band. The band played skapunk when that didn’t get yer ass kicked, but these Detroit punkers always had the tunes and the rage to go beyond that upbeat deathtrap. Steal this Record is deceptively octane-fueled radio punkpop, borderline rock. This is the band’s fourth major label release, and I’d say it’s my fave since the first, ’96’s Destruction by Definition, which I liked so much I interviewed the guys. It was a mistake cuz I liked the foot-to-the-floor party feel of the record better than the you-can-make-a-difference political drippiness I got during the interview. The title, by the way, is an adaptation of late activist Abbie Hoffman’s Steal this Book, which was made into a movie, Steal This Movie, though I try to overlook as much of the politics as possible. 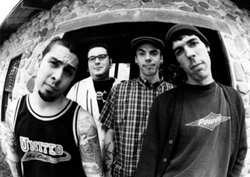 There are a handful of good tunes that’d work well in a teen movie about girls and coming-of-age and not fitting in but being a rad skateboarder/artist/writer/whatever with a big heart. Like Blink 182, but a bigger, more roaring sound (Detroit, remember?), the vocals often pushing over the edge into “hardcore-lite” territory, but it’s not as bad as, um, Glasseater and the trillions of yelping/roaring hardcore/punk/emo/whatever’ll-sell shitheads who simply can’t sing, so they yell. This dude can sing AND he can yell, ok? There’s smatterings of Guttermouth and Green Day and, um, The Knack. There’s a cover of R.E.M.’s classic “It’s the End of the World As We Know It (And I Feel Fine)” which is predictably good’n’rawkus. H2O’s Toby Morse joins in, and that oughtta hint at where this CD is coming from. A goal for this CD, the bio states, was to make a record you could play from end to end. And they mostly succeed, there being only a few songs that “stretch” beyond my threshold (for politics, ska, or “single-sounding” streamlining), though other people are bound to draw the line shy of the Randy jumping or Guttermouth ranting. Seeing as most popular music has the exact opposite ratio of hit-to-suck, this scores well.
(www.thesuicidemachines.com) 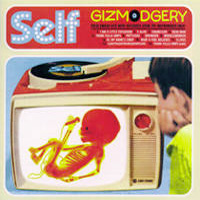 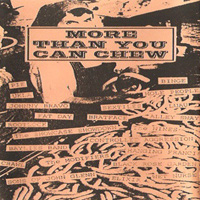