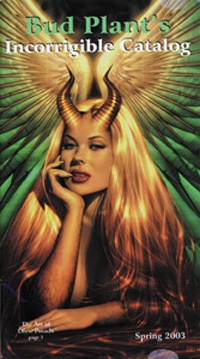 I always note how difficult it is to develop a column with no mention of Robert Crumb, the foremost American underground artist. He’s foremost because he’s the most extensively published. Further, he’s one of the earliest founding fathers. Rumor has it that when he opted to relocate to France years ago with his wife, Aline, he financed the purchase of a small house with the direct sales of a lot of his portfolio of artwork. Imagine doodling on napkins and placemats while you’re waiting for a food order in a restaurant and then someone collects them, publishes them, and gives you money! He has two books of these published. Allegedly, locks of Elvis’ hair collected by a barber sold like hotcakes. That’s a couple notches up from selling your turds, isn’t it?

At a loftier level, R. Crumb Sketchbook Vol. #9 from Fantagraphics (7563 Lake City Way NE Seattle, WA 98115) covers his sketches Oct 1972-June 1985. It’s a mixed bag. Often, his sketches are just teases, where he starts and ends a line of thought in one sketch, leaving you wanting more. It’s like listening to your favorite recording artist doing a series of fifteen second snippets.

On the other hand, you get to see Crumb settle in and truly finish off a sketch of a woman or a woodland scene that causes you to appreciate it when he goes beyond the cartooning. Then again, he’s a truly gifted cartoonist. His final story in Mystical Funnies #3 had me pounding the floor and struggling to regain my breath I was laughing so hard. I wonder whether he’s as intellectual as he sometimes seems to believe, but as an observer of the absurdity of American life and reducing it to cartoons, few can touch his breadth. 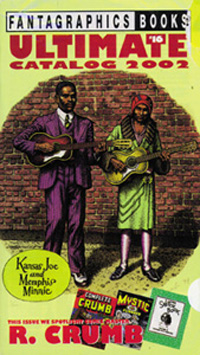 I’m such a Crumb fan that I committed $200 for a box of Crumb silkscreen limited posters available only from Europe. I’ll keep y’all informed, but Crumb obscuria is going to be one of the real collectibles of the millennium. Go to eBay and find any pop artist with as much play as this guy. His material is all over the map.

Fantagraphics got nominated for an award. They were quick to make that fact known, but had enough class to post the story with reference to the other nominees as well. Cutely enough, one of the other nominees was the magazine Too Much Coffee Man, a young, hip, independent from Seattle to which a reviewer from Fantagraphic’s The Comics Journal gave a lukewarm review. I’ve got a subscription to TMCM so I come out in opposition to the review.

Art Speigelman and Francoise Mouly are not quite doing the cutting edge of their former Raw publications, they’re doing a set of children’s literature. The first is Strange Stories for Strange Kids which nevertheless should still be a quality product.

I’ll admit to the guilty pleasure of buying a copy of Playboy when I fly. Usually, I go “Oh man, they’re still so in the ’80s!” But when no one’s looking, I eat up the jokes, the interview, the reviews, and the fiction. I flash through the photos that don’t seem to ever change in style: Naked women that you’ll never see. Why bother? So I’m gritting my teeth to report that their tip, www.beecomix.com was even…. ah… hip. They have great links to Top Shelf, who are big on my list for breaking new titles and taking chances. How dare Playboy get up to date! 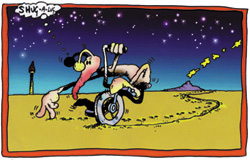 I just received Blab #13, edited by Monte Beauchamp, and published irregularly by Fantagraphics. It’s $19.95 and I find it difficult to embrace. The first third of the book to me is nearly incoherent European babble. The first story has the President of Finland swallowed by a whale. Another, with interesting art, is advice from an uncle to a nephew on how to take care of his teeth. Another unnecessary story tells of the tragic sinking of a ship with 67,000 sheep as cargo. Many pages are cluttered collages with no decipherable intent. A few stories – “Deep Blue” by Peter Kuper, “The House on Wakefield Street” by Spain, and “First Bass” by Doug Allen – nearly save this, and previously it’s been a terrific series – one of the best – but I’d have to pass on this as a recommendation.

Drawn and Quarterly, the highly-decorated Canadian alternative publishing company, continues to produce work by the great Adrian Tomine, one of their more bankable regulars. Tomine was regarded as a very probable genius in ascension five years ago, and while he has yet to be crowned king of the autobiographical ’90s storytellers, he’s certainly not gone away. Ever since Robert Crumb and Justin Green, there’s been a glut of young artists sure that we want to read their personal anecdotes of growth. Summer Blonde captures issues #5 through #8 of Adrian Tomine’s personal comic, Optic Nerve, and looks to be a blockbuster at $24.95. Tomine has done a few album covers for such groups as the Eels, the Crabs, the Softies, the Dance Hall Crashers, and Weezer as well as doing illustrations for the New Yorker. Drawn and Quarterly also carry Joe Sacco, who’s done ground-breaking material on Palestine and Bosnia as a cartooning war correspondent. You go, Drawn and Quarterly. 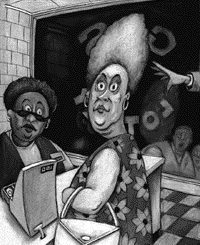 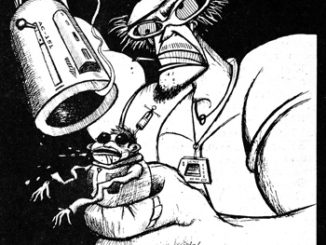 Hooray for Everything! – Fiction