Here is the transcript of their conversation.

Jean-Paul Bavard: I am pleased to be meeting here today with a newcomer onto the entertainment scene, a relative unknown who goes by the name Mad Donna. My personal assistant, Gustave, informs me that you, Mad Donna, are some sort of actress/singer. And I do see that you bear a striking resemblance to that irritating old lady from the horrible film Swept Away. Perhaps you are somehow related, non? Your look of outraged confusion indicates to me that perhaps you cannot follow the depths of my insightful observations, so I must change tack and lead our conversation into another, simpler direction. Let us now discuss music. Certainly, as a newcomer to the musical scene, you have been deeply influenced by the burgeoning genre of music known as Ambient Tribal Bleeptronica, which is literally sweeping the nation, and then mopping, but not doing windows. How would you compare your own music to that of such incredible Geniuses of the Ambient Tribal Bleeptronica scene as DJ Boris Alexeev, Captain Feedback, or Twiddler J?

Madonna: Are you joking? Don’t you even know who I am?

Jean-Paul Bavard: My notes indicate that you are pursuing a career in the field of entertainment. As someone who one day hopes to become a moderately famous entertainer, you surely must be well-versed in the work of the essential and seminal post-millennial artists in the genres of Deep Minimal House, Trip-Hop and Neo-Basscore, such as MC Spex, DJ Disc Jockey, The Eradicator, Chad Maximum Supreme, Deep Jeremy, and Commodore Atari 5. If you could take any one, but only one, of their many critically-acclaimed recordings to an uncharted desert isle, would you continually thwart the rescue attempts of your fellow castaways with your well-meaning yet boneheaded comic misadventures? And would you pack several closets full of designer clothing for a three-hour boat tour? Or do you prefer simple denim cutoffs with a red-checked button-down top?

Madonna: I came here to talk about my new album…

Jean-Paul Bavard: Ah, but of course, the new release by the undiscovered newcomer called Mad Donna, unknown throughout the music industry until this very legendary and groundbreaking interview with the World Famous and universally adored Music Critic and Theorist, perhaps your very own archetypal “Big Break” that shall doubtlessly propel you from no-name status to chart-topping musical superstardom, as did my now-infamous interviews with such then-unknown future hitmakers as Mungo Jerry, Rick Springfield, and Leo Sayer. I remember when I first interviewed Leif Garrett in 1973. He was then still a literal “nobody,” hoping to parlay his below-average looks and underrated tap-dancing skills into a career as a pop star, or perhaps as a televangelist or street-car conductor. Being continually on the avant garde cutting edge of all music, fashion, and media, I saw greatness in him, and agreed to interview him for a cover story for Effeminate Teen Boy magazine. Perhaps we are on the cusp of a similar breakthrough for your until-now-lifeless career, mademoiselle Mad Donna? You can only dream, yet I, as a fame-broker and arbiter of critical esteem, hold your fate in my very palms, near some mustard stains and dried ink. Do not fear, Ms. Donna, for I am nothing if not a fair and impartial journalist interested only in bringing the truth to my faithful and adoring public. My notes indicate that in addition to your attempted musical career, you are known in some circles for your sexual conquests of B-list celebrities. Apparently you are now married to hip British Filmmaker Lionel Richie, and were formerly married to permanently angry actor Wallace Shawn. My assistant’s exacting research notes also claim that you once were intimate with freakish, tattooed basketball player Denis Rodham Clinton, and knew, in the biblical sense, that world-famous star of cinema, Ned Beatty. Tell all the world now of the odd sexual appetites and preferences of these moderately famous men! What sort of costumes would you wear…

Madonna: Shut up! What the hell is wrong with you?

Jean-Paul Bavard: Ah, a rather transparent attempt to garner attention for yourself by behaving petulantly with the media! Bravo, Ms. Donna! Let the controversy begin!

Jean-Paul Bavard: While the tempestuous young actress/singer known charmingly as Mad Donna powders her nose, a quick glance at my assistant’s research notes indicates that this Mad Donna person, known affectionately to her friends as The Immaterial Girl, authored a book of pornography, and had minor roles in such award-winning films as Trace Dickey, Turner and Hooch, Shanghai Surprise, What’s That Girl? and Evicted. Apparently, her new musical release is an album entitled America Lite, and consists entirely of recordings of her screaming insults at her devoted fans. Perhaps when she returns, we may discuss her surprisingly large discography, or her career as a character actress in direct-to-cable TV films.

[20 minutes of silence on audiotape]

Jean-Paul Bavard: Well, it seems as though the charming young singer/dancer with whom I have been chatting has been unavoidably detained, perhaps sensing a need to perform on the nearby streetcorners or subway stations of this fair city in order to accumulate the cash money needed to pay the bill here at this fabulous bistro today. A noble gesture indeed, as the waitstaff seems to be lingering nearby, casting unamused glances in the vicinity of this very table. Jealousy, no doubt, a common occurrence for a world famous journalist and theorist such as myself. Such is the price of glamour, alas! Your faithful correspondent must sign off now, as my celebrated breath must be saved for what promises to be a rather undignified dash for the door of this posh bistro. Another occasional hazard of the occupation, of course. Farewell, my loyal readers, farewell! 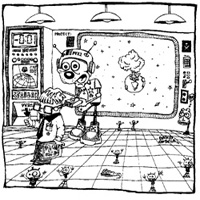 The Culture Bunker – Vanity, Thy Name is Lucre – Fiction