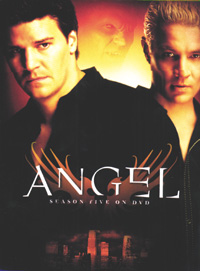 If you’re even reading this review, you already know about Angel, the spinoff of Buffy the Vampire Slayer, about a vampire with a soul fighting to become a champion. Buffy fans will probably want to decapitate me for saying this, but I’ve always felt that Angel was a better show. The main theme in Buffy is of a young girl who grows up too fast, burdened with responsibilities both social and supernatural, and the conflict between those responsibilities and the normal teenage life that she’d like to lead. Angel, on the other hand, is the story of a hero (David Boreanaz) who used to be the embodiment of evil, who now tries to redeem himself by fighting evil, including the evil within himself. The catch is that evil is necessary for human existence, making redemption impossible, a Holy Grail lying just out of reach. This makes Angel more of an existential Greek tragedy. It’s darker and more serious, its themes more epic than Buffy‘s ever were. In essence, Buffy was a show for teenage girls, while Angel was a show for young men.

But young men aren’t as rabid a fan base as teenage girls. This fact – coupled with its spinoff status – probably explains why Angel never had the viewers that Buffy did. In order to stay alive, the fifth season had to make significant changes to satisfy the network. The multi-arc apocalyptic plot of the previous seasons is swept under the rug in favor of a more episodic format. Connor (Vincent Kartheiser) and Cordelia (Charisma Carpenter), main characters in the previous seasons, make only brief appearances in this one. For the most part, the supporting characters are gone completely.

The main villains in Angel are not the demons and vampires, but a law office called Wolfram & Hart, who don’t actually do evil, but merely grease the wheels to make evil happen. Though they work for a group of never-seen malevolent entities called the Senior Partners, they’re really just a group of people in business suits trying to do their jobs. In the previous season, Angel and crew killed God and ended world peace in order to save humanity’s free will. Seeing the innate Satanic virtue in this, the Senior Partners decide to reward Angel, so they hand over Wolfram & Hart to him. Now Angel has to use the law firm to do good, but still do just enough evil to keep their clients happy so they won’t just set up shop somewhere else. It’s a moral quagmire, where every noble act leads to corruption, and it ends up changing Angel and his crew for the worse. Some more than others. Things are complicated even more by the appearance of Spike (James Marsters), the OTHER vampire with a soul, romantic rival and reluctant hero, who may or may not embody the champion spirit that’s slowly dying in Angel. Spike pretty much steals the show whenever he’s on screen, and the love/hate relationship between him and Angel results in some of the best scenes ever to appear on television.

Because of its more episodic format, the season takes a while to find its legs. (Buffy fans should be familiar with this phenomenon.) But it doesn’t take that long for everything to fall into place. The story arc starts to ramp up, the characters gain some depth, and the main conflicts are cemented. And the viewers respond: Season five had the highest ratings in Angel‘s history. By the time an old enemy returns (I won’t say who), everything seems to be right on track. But, in the eleventh hour, with just a handful of episodes left in the season, the network announced it was cancelling the show. (I guess they figured it didn’t meet the artistic standards of, say, Seventh Heaven.) This resulted in a season finale that probably pissed off more than one viewer, because it really wasn’t much of an ending at all. But it fits in perfectly with the ethos of the series: No final victories, no redemption, just a life of constant struggle until you die. Good guys don’t win, they just go down fighting.

But there’s no question that the show ended too soon, and this is a pity. If there’s any justice in the world, Angel will eventually be seen as a hallmark in television, as good or better than (say) Twin Peaks or the X-Files. I doubt that we’ll ever see another show as funny, creative, or intelligent as this one. And I’m certain we’ll never see another show where the main character accidentally gets turned into a muppet.
(www.foxhome.com/angel) 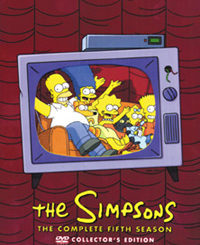 Young Sexy Assassins – May Day in the Garden of Memories – Review 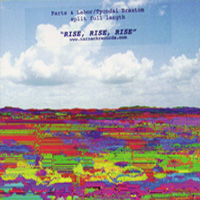