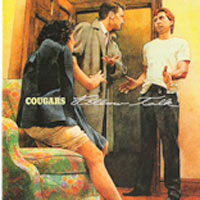 Go-Kart returns in 2006, cuz as always, their “business model” has nothing to do with convention, they just do their thing, when and how they want. So yeah, the music biz is in the shitter, good bands are starving, shitty bands are still making a living, and labels don’t promote for shit, cuz most people are just gonna download the tunes for free anyway. Yeah, now’s a great time to start releasing records again, guys.

Cougars? Yeah, good, chaotic, loud & boisterous, totally locked-in rhythm, freakin’ horns’n’reeds, and the band’s either from NYC or Chicago. Got a “band to know” nod from AP, got an EP on Thick (which is why I think they’re from Chicago… Who’d go further than the end of the driveway to have a record on Thick?), but they’re not cute or trendy, so how do you market them (or in Go-Kart’s case, not)? Seriously, when I say locked-in rhythm, that’s no joke: These folks take hairpin turns at unsafe speeds, all slamming and careening inside their vehicle, doing their individual thing, but all veering together, seemingly instinctively.

Can’t pick a fave, cuz each song staggers forwards, starts its motions, then gets it’s groove and it’s your new fave. I can’t sing along or quote lyrics yet, but I’m starting to learn to anticipate where the guitarist is just gonna repeat that note for another 8 count and give me the finger when I look up, wondering where the next part is. The rest of the band felt it coming and waited for me to look up, like a sucker. Fuck yeah.

Get the band on the mp3 CD, help Go-Kart reintroduce themselves. Uh, again.
(www.gokartrecords.com) 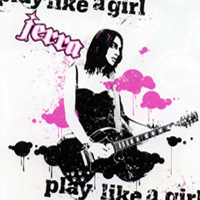 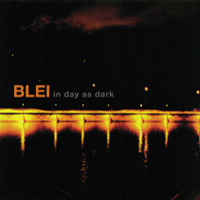 Blei – In Day As Dark – Review