Myth and metaphor might do the trick for some, I suppose, if you’re a pussy. But who can settle for anything less who remembers the days when the spirit of “fuck ’em all” reigned supreme? Aggorautix, makers of the Throbblehead, are helping keep the flame (and that chronic burning sensation) alive  through their many efforts at the Aggronautix website. The site has current news and updates on the state of the scumpunk scene, and also has for sale the now  legendary Throbblehead action figures.

Aggronautix has all your faves like G.G. Allen, The Meatmen’s Tesco Vee, Descendents’ Milo, Andrew W. K., and Circle Jerks’ Keith Morris. The heads  bob up and down and all around like those of major league baseball players you saw pleading the Fifth before Congress about steroid use a while back. And rumor has it, the folks at Aggronautix are even working on a design that will have the hips  thrusting along the horizontal plane, called “Throbblecocks” or something.

Throbbleheads are a profound addition to any behind-on-the-rent living space. A friend of mine, who is inexplicably married now, got in a heated discussion with his wife when he put his Tesco Vee Throbblehead into a model he was inspired to make of “downstairs-at-the-Rat” with his son’s Legos.  The Throbblehead held up much better than the Legos in the ensuing chaos. At first, it looked like the Rat after  a Meatmen show, but as the discussion wore on, it began to more look like The Rat after the bulldozers had leveled the place to put up luxury condos.  Needless to say, Tesco Vee came through it bloodied but not bowed. 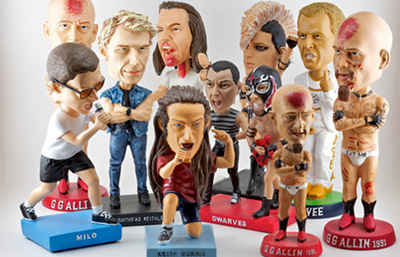 All Throbbleheads are a customized likeness of your favorite legend. The Plasmatics’ Wendy O’ Williams Throbblehead isn’t Tesco Vee in drag. They all closely resemble the actual performer they depict. I’m not sure where these things are made, but  I’ll bet you would learn how to say “What the fuck” in Mandarin pretty damn quick at the factory if they’re designed here and then imported from China, or in Spanish if they’re made right here in the good old U.S of A.

These babies are really built to last, too, not that they actually will if you mistreat them right. Each comes in a stylishly illustrated box suitable for spilling any number of sundry beverages and bodily fluids upon, and then crushing on a friend or loved ones head. Or simply put the figure back in the well-dampened box for a couple of days to give it an authentic, back-in-the-day stench. 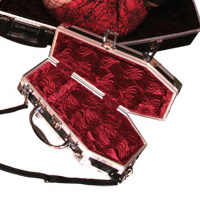