Kentucky’s Black Stone Cherry is hitting the road next year with a series of headline dates beginning February 1, 2012 in Libertyville, IL.  Black Stone Cherry has had an amazing year following the May 31, 2011 release of Between the Devil & the Deep Blue Sea, an album Classic Rock Magazine just named #4 of “Albums Of 2011” in which they declared it “…one of the most important albums of 2011.”

Produced by Howard Benson (Theory of a Deadman, Daughtry, Three Days Grace), Between the Devil & the Deep Blue Sea has spawned three Rock radio hits to date. The first single “White Trash Millionaire” peaked at #11 at Rock radio while the second single “Blame It On The Boom Boom” was top 20; their third and most recently released single “In My Blood” is currently #33 on the Rock charts and climbing.

Black Stone Cherry’s music has also been all over TV with their songs most recently being heard on ESPN during NASCAR and on ESPN’s Monday Night Football and in the film “Abduction” starring Taylor Lautner, Maria Bello, Sigourney Weaver, and Alfred Molina.  The track also appeared on the soundtrack, released on Epic in September. 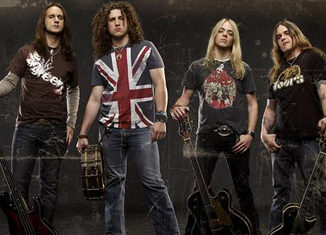