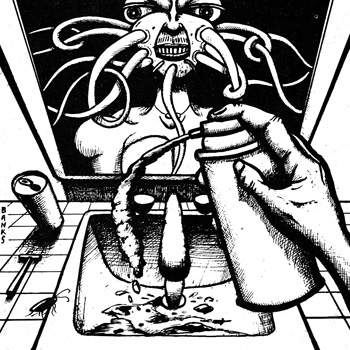 It started one morning, about a week ago, when I started to shave as I do every morning. For some weird reason, this morning was different. I’d just run out of shaving cream, so I searched around my messy apartment for something to use. I found a can of special foam lather that had been abandoned in a remote corner. I figured the stuff couldn’t really go bad, so I brought it into the bathroom to perform my regular morning routine.

At the time – that first morning about a week ago – I didn’t notice anything out of the ordinary, but then again, I was in a big hurry. I was already late for work, and the boss would be chewing me out all day long for my repeated tardiness. I guess I’m not the most responsible person in the world, but I really couldn’t care less. But I digress.

I went to work, after cutting myself numerous times in my rush to finish shaving. As I figured, the big man razzed me for about ten minutes straight and threatened to fire me for about the one hundredth time. Later on, sitting in a cubicle that was one hell of a poor excuse for an office, I started feeling really sick. Fearing a permanent vacation from my job if I requested to go home, I put up with it and finished the workday.

When I got home, I noticed a strange rash all over the hair-producing region of my face. Not thinking much of it, I threw some moisturizing cream on the rash and went to bed. That night, I had a lot of screwed-up nightmares. They may have had something to do with what was beginning to happen to me, but I really couldn’t tell at the time.

I woke up the next morning feeling pretty messed up. I felt like my face was on fire and my flesh was crawling. When I reached up to rub my face as I do every morning after awakening from a wonderful night of slumber, I almost screamed. Where there had been a rash the day before, I felt a fully grown, somewhat healthy beard and mustache. I’d heard of fast-growing hair, but this was ridiculous.

The first thing I did was shave (using, of course, the newly found ancient can of special lather formula). When I’d finished, the rash had disappeared, so I went to work. For the first time in forever, I was early. My boss laughed his ass off and told me he was glad I was finally getting my act together. The day passed uneventfully, and soon I was back home and in bed again, ready to rise for the next day of work.

The next morning, the beard was there again, even thicker. It wasn’t just more hair, either. The strands themselves were thicker. Trying to pass it off as mere happenstance, I shaved it off again and went to work.

For the next couple of days, the same thing kept happening. The strands of hair on my face got progressively thicker. On the fifth day, each individual strand bled when I shaved. After the first stroke of the razor, they just started spewing blood all over the place. It wasn’t painful, but it really freaked me out. I got it over with quickly and bandaged up my face to prevent further blood loss. Feeling a sudden lack of energy, I ate a Twinkie and went to work. All day long people were asking about my face, but I just told them I had a really bad rash. Man, I wish that’s all it was.

The next morning after a restless, nightmare-filled sleep, I woke up and started to go insane. At least I think I went insane. The tentacles (I couldn’t think of a better term for them) were down to my waist. This time, they were moving of their own accord. Looking into my scuz-covered bathroom mirror, I beheld the sight of a monster. Each tentacle that protruded from my face was at least a half-inch in diameter. They writhed and seemed to caress my now-disgusting face. They still had the appearance of hair, but they were very thick and very alive. Needless to say, I called in sick to work. My boss didn’t believe that I was ill. I told him to fuck off, finally fed up with all his shit, and he told me to find a new job. I obviously had more pressing matters on my mind.

I spent the whole day sitting in my apartment, the shades drawn so no one would see me, contemplating what was happening to me. After a few hours, I figured out that I could control the tentacles. They were amazingly strong. I ripped apart an easy chair with them without any noticeable strain. Suggestive thoughts began to enter my mind as well. They seemed strange at the time, but now I know that they were the beginnings of a unique genius that was creeping into my consciousness. I felt a certain amount of power being given to me through these monstrosities. The more I thought about it, the possibilities of what I could do became endless.

That was yesterday. When I awoke this morning, the strands were almost as long as my body, and twice as thick. Things have all clicked into place in my brain. The world around me is merely something ripe for the taking. All it needs is for someone like me to go out and grab that power. After I finish writing, I’ll destroy the can of special lather, for I know now that it is the cause of my wonderful new condition. Then I’ll go pick up my final paycheck, dismember my former boss and set out to conquer the world.

Of perfectly sound mind and body… 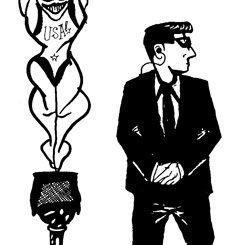 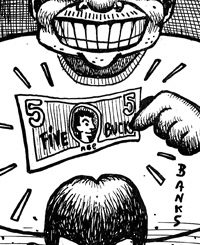