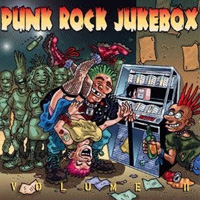 Twenty-three bands contribute one cover tune each of punk rock oldies that inspired them to creativity, or pure imitation, as the case may be. The most pervasive difference between these covers and the originals is that in the good ol’ days, most of the bands had no idea how to play their instruments. They usually hid this with cheap production, leaving one free to pogo or slam to his/her heart’s content. The punk rock majority these days, as documented by Punk Rock Jukebox (Blackout!/Cherrydisc), have the same or less ability to play their instruments (or sing, for that matter, but that’s a whole other can o’ worms), but can afford studio techies who actually know how to turn a knob or flip a switch. Too bad, ’cause you can hear every detail that they’re fucking up crystal clear and it kinda ruins the fun. Not to mention that it comes off sounding really flat and un-pogo-able. There are a lot of other factors involved that made the first wave of punk way better than the one we’re on (the first-wavers knew they were sticking their necks on the chopping blocks, and that’s the last thing anyone seems willing to do these days), but there’s no reason to go into it any further here.

New Bomb Turks dig deeper than their contemporaries and come up with a worthy cover of the Chocolate Watchband’s “I Don’t Need Your Lovin’.” There’s also a group called No Brain that includes Lint and Lars from Rancid, Mark and Chickie from Sheer Terror, and Marky Ramone. They rip through the Ramones’ “I’m Against It.” And there are the Bouncing Souls and 88 Fingers Louie, who perform almost frighteningly accurate renditions of “Code Blue” by TSOL and “I Don’t Wanna Hear It” by Minor Threat, respectively.

And then there are the dim lights: First off, just who the fuck do Black Velvet Flag think they are, anyway? Their entire act consists of lounge music covers of punk rock classics. Punk rock (the real thing, anyway) is already self-effacing and has parodied itself to the point that poking fun at it is next to impossible to pull off. Plus, I don’t see how lounge punk could possibly be a good enough joke, even if it were funny to begin with, to form a band around. Then there’s the fact that they can’t play worth dogshit, which make Black Velvet Flag nothing more than a lounge act wanna-be, since we’ve already established that the humor is redundant. And what, I ask you, is more deplorable than being a lounge act wanna-be?

Awkward Thought do “Evil” by the Four Skins, and their rendition is 100% true to the tradition that this CD pays tribute to. “Go Nowhere” by Sweet Diesel does exactly that. It’s shameful to trivialize a song by Reagan Youth, one of the greatest and most under-appreciated bands in punk rock history. To their credit though, Sweet Diesel couldn’t have screwed up Reagan Youth nearly as badly as the movie Airheads did if they tried. In Airheads, “Degenerated” was transformed into a teenybopper hard rock anthem, and I nearly cried at the injustice of it all.

Leeway do a cover of the Zero Boys’ classic “Civilization’s Dying,” which is reasonably close to the original and is the best song Leeway has done in years. Trusty try their hand at “Ready, Steady, Go” by Generation X, and do an OK job of it considering their limp-wristed vocalist couldn’t match Billy Idol’s arrogant sneer in this, or probably even the next lifetime. Brody do their version of Dag Nasty’s “Justification,” and sound just like Dag would have if their singer had a speech impediment. Jughead’s Revenge plus Plasmatics equals Adolescents. Makes sense, I suppose.

Outcrowd‘s attempt at Government Issue is so bad I can’t be bothered to explain why. Get the CD (it’s actually worth owning. It’s just that its goal is so lofty that I feel I must point out its shortcomings) and you’ll see what I mean. Deadguy do Black Flag’s “Police Story,” which is about 1/3 as good as the original, and twice as good as all the songs on the new Deadguy CD combined. Murphy’s Law covering the Rezillos sounds like Murphy’s Law covering the Rezillos. The Turbo AC’s make Anti-Nowhere League’s “Woman” sound like an Urge Overkill ballad until the end where it speeds up and flips a swarthy British bird, i.e. backwards, peace sign.

The Goops can be excused for their goopiness in their rendition of Stiff Little Fingers’ “Barbed Wire Love” due to their obvious admiration for the Irish punk legends. Waterdog do a watered-down Jam tune. Killing Time add aggressiveness, but subtract cleverness, from “Bodies” by the Sex Pistols. Sublime do a fun dub version of “We’re Only Gonna Die” by Bad Religion before kicking back into the blistering melody of the original. The Swingin’ Utters perform a competent version of “I’ve Got Your Number” by Cock Sparrer. Buzzkill try their hardest but do little justice to the Bad Brains. While Flag of Democracy‘s singer could out-spaz their fast drummer, Plow United‘s singer can’t keep up with the hyper-caffienated beat. Finally, H2O covers “Friends” by Marginal Man, and adds a little flavor to the original without taking too much away. And that’s all, folks! (What, no Dils?!!) 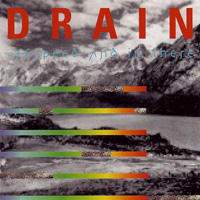 Drain – Offspeed and in There – Review 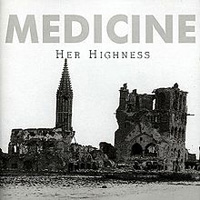