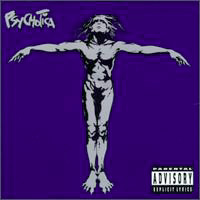 (American)
An interview with vocalist Pat Briggs
by Lex Marburger

It’s still weeks away from Lollapalooza, and I haven’t had the time to come to New York and see your show, but I’ve been told it gets pretty crazy. What I want to know is, how crazy does it get?
It depends on the situation and the vibe of the crowd. I personally don’t think it’s as crazy as people make it out to be… but keep in mind, I’m from NYC, where the boundaries are pretty much endless. There are a lot of people here who do what I do. There’s a whole subculture of pseudo-performance art mixed with rock. I have my doubts about how unique we all are.

Well, you did make it onto the Rock and Roll Hall of Fame (alongside Bowie and Reznor), so there must be something.
It looks on the surface like we’re an “overnight sensation,” but I’ve been doing this for thirteen years. It’s been a long road.

If it’s possible, could you describe a typical show, if typical is the right word?
The great thing about doing what we’re doing with this type of band is that really there are no boundaries. I can change the show at any given time, I can do basically anything I want. The sky’s the limit, and it’s better than being in a regular, normal rock band that’s afraid of putting their head on the chopping block. I certainly don’t have a fear of that .

You mentioned performance art-as-music, or vice versa. Do you mean something like GWAR does?
We come from the same school of thought, but I try to approach it from more of an art perspective rather than “dark comedy” (for lack of a better term). As far as I think, we’re not even near as way out as bands like GWAR or Green Jello. But we have some of the same sensibilities, we try to keep a sense of humor about what we do. I mean, I do things like come out of a chrome egg, completely naked, and simulate birth, but I try to at least have some symbolic reason for doing what I’m doing. I don’t know if it always gets across, but in my mind, I’m doing it for a reason, not just to be silly. 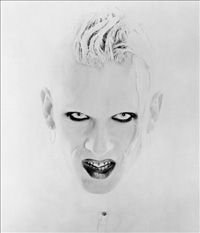 I also heard a weird rumor…
Do we have to discuss it?

That you’re surgically neutered?
Because it’s the early stages of things, I don’t want to discuss that. There are only certain parts of my lifestyle that I’m willing to talk about, because we’re going on a tour in front of 14-21 year old kids, and I kind of feel like I have to have a sense of responsibility about what I do right now.

Well, if you’re coming out of an egg naked, it will be sort of… obvious.
Yeah, it is. It is obvious. Anybody who has come to see my show can tell you the deal. It’s not the same show that I’m going to be doing on Lollapalooza, because, like I said, there’re certain facets of my life that I wouldn’t want to portray to some young kid. It’s not necessarily the answer for them. It’s not that I don’t feel comfortable talking about it, it’s something I’d rather not stress. I’m trying to bring back some… ooh, I hate this word… some “values” and “ethics” into what I and a lot of other people do. It think it’s gotten a little lost. You’d have to see it to really understand that it isn’t there to shock, it’s there because it fits with what’s going on in the music as well. For instance, when I do the whole opening with the silver egg, I look very other-worldly, and there’s a song written specifically for it called “New Man.” It’s about rebirth, so it fits with the whole. I didn’t come up with it to be shocking, I thought it would be a cool theater piece.

What sort of values are you hoping to bring back?
I’m an entertainer first and foremost. I’m responsible for leaving my own personal shit off the stage. It’s becoming increasingly irritating that people have forgotten that they’re entertainers and that they’re there for the audience, not themselves. I think rock and roll has become very narcissistic. Part of the reason Psychotica was created was to give people their money’s worth, and make them feel like they’re getting more than some guy going through therapy with a guitar! That does fit with some acts, but you’ve got to have a little variety to choose from, too. I think that the whole apathetic live show thing has become as “Spinal Tap” as the hair bands of eight years ago. From my own perspective, I loved the whole vibe of New Wave, and Devo (they cover Devo’s “Freedom of Choice” on the CD), and I miss that kind of fun in a show. I remember seeing Devo live when I was kid, and getting really fucked up, and thinking “Oh my God, this is completely ridiculous! It’s wrong! It shouldn’t be on stage!” But that was the beauty of it; guys with flowerpots on their heads, and they were a good band, you know? That feeling is the primary purpose of Psychotica. Make it fun again, a little tongue-in-cheek and a little serious. I’m serious about my work, but how serious can you really be when you’re coming out of a chrome egg? I try to bring art that makes an impression on me to life. Like, how would a Salvador Dali painting look if it were alive? I like to think of things in an abstract way, rather than “Oh, how can I shock them, or piss them off?” Art can be shocking, that’s the way it is.

Are there any main points you want to convey during your performances?
I’m trying not to be all that serious about it. Too many people put themselves in a position of being a therapist, and I’m not qualified to do that. Based on my own experience, I’ve been out on my own since I was 12, and have done a lot of things that I’m not necessarily proud of, but they carved me into who I am today. If I can at least be a bit responsible and prevent someone from taking the same road, and offer them a shortcut, I will. But I don’t really know how to do that. I’m trying to stay off of the soap box, ’cause it’s not really my place. I’m much more interested in doing silly things on stage that are amusing to me and to other people, and if nothing else, take people on a trip for an hour and send them home thinking that life isn’t all that tragic. I mean, I’ve had a really fucked up life, but the outcome has been very good for me, so I can’t really complain. 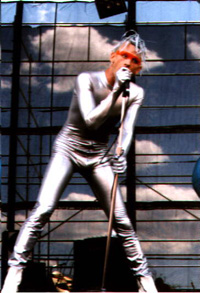 But you’ll be toning it down for Lollapalooza.
Not toning it down, just doing something different. If people are disappointed, then that’s their problem (laughs). I think we can’t really help the sexual vibe, it always creeps in. Sex is something we’re all preoccupied with in a lot of ways. I fancy myself very ambiguous in many ways, and I like that, so I try to portray that. The real crux of our show is that we’re a maybe typical, maybe not-so-typical glam band, and we have taken some elements musically and visually that don’t technically belong together and thrown them in a big pot and come up with a new mixture of things.

What did it take to alter your looks so… radically?
I’ve always had the luck or style, or whatever the hell it is, to be able to make visual the way I feel on the inside at various points in my life. I don’t think I was very conscious of it until recently, but that is in fact what I do. How I look very often reflects what makes me tick. I think this particular persona reflects that for most of my life I didn’t feel a part of… things. I mean, I’ve been in the music industry for 12 years, and this is not my first time in a band, and during that time – and continuing today, even – the industry is totally a testosterone boy’s club, and I got really sick of it, sick of everybody who wasn’t a part of that being excluded. It was very oppressive, especially the hair band phase in music. Very oppressive for all people involved, even the ones right in the middle doing the oppressing. I rebelled against that and thought “fuck ’em.” Doing that makes other people think, and it makes me think, because I’m constantly questioning who I am. If ever I say anything important from the stage, it’s that everybody should always question themselves. I’m going to be evolving constantly. With every record, as soon as I get bored with it, I’m going to evolve into something else, as well as the band. It should be fresh for all people involved.

You said you’ve been in the industry for over a decade. What were you in before Psychotica?
(pause) Um, I was in a band on MCA that was irrelevant and made stupid, oppressive music…

You were in a hair band, weren’t you!
Yeah, I was. So when I talk about that stuff, I talk from first-hand experience. A question I keep asking myself is, why is it all my peers from that time can’t even get arrested now, and I’m like the disease that won’t go away? I’m like eczema; I just keep showing up and making people itch. I’ve had deals with Atlantic, MCA, Columbia, and now American; I’ve done the whole circuit, and now I’ve found a niche. I plan to have a good time.

Do you have any idea where the next evolution is going to take you?
Yeah, but… I’m not going to give it away just yet. 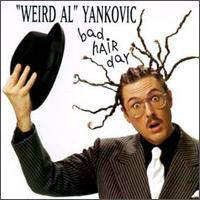 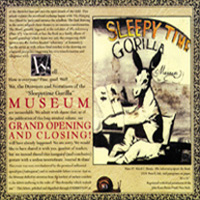