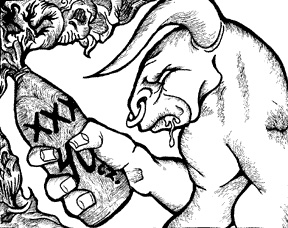 It has come to the attention of Lollipop that many of our readers enjoy imbibing an alcoholic liquid every now and again (and again…). In the public interest, we offer a Lollipop guide to Liquor. Please note: We are trained professionals and the “experiments” that follow were not attempted by “casual” or “social” drinkers. Lollipop assumes no responsibility for the actions of any drunk person, including its own staff. And ask Mom first, okay?

I was unsure as to whether or not this stuff should be covered in our little talks. But at the insistence of Fred Hagemeister, Sara and Majda Gama (really, I didn’t make these names up), I shall take this Liquor into the fold of the Lecture. Fred wrote a pretty neat article of his own, but… I’ve got a few good stories myself.

To start, Malt Liquor is simply beer that has been distilled longer than regular beer to increase its alcohol content. The makers also add corn and rice to the mix, also to up the alcohol. As a result, the taste of Malt Liquor is like making love in a canoe: fucking close to water. But that’s not why you drink the stuff. You drink it because it fucks you up. And it’s cheap.

Back in The Day, when I was pretending to be a punk (and I was pretty good at it, too), I was living down in Annapolis. One summer, I was supposed to go on tour with my band, The Shit, but the bassist quit. So I was left in Nap Town with no apartment and nothing to do. What I found was a supportive community of communal punks and other deviants who helped each other out. There was a studio apartment that one of them was renting, and we all used it as a crash pad. Apartment 37 was the scene of some of my more interesting experiences. Since we had no money, we would always get Malt Liquor when we needed to drink (which was often). Down at the corner, they sold Mickey’s Big Mouth for 99¢ a 40 oz. Whoo! There’s nothing like wandering down the streets at 2 AM with a half-full bottle in a paper bag, being towed along by your friends and hazily causing a ruckus. No, sir, I can’t describe the ruckus. Some days the drinking would start early. I remember once when I blearily awoke curled up on the floor next to four other people, with a large naked man standing over me with a 40 in one hand and a bag of airline peanuts in the other. He handed them to me saying, “here’s breakfast.” Now that’s the way to start a Tuesday off right.

But it wasn’t all fun, games, and naked men. There were times when Malt Liquor was my worst enemy. Case in point: One day, I came into some money and as I walked into the liquor store, I saw an amazing sight. What looked like a liter of Malt Liquor, under the not-so-innocuous label “Crazy Horse.” I bought two, and went to a show. It was in a guy’s garage. After the first bottle, I was stumbling around, slurring my speech, and bumping into things. Apparently, my sense of judgment was impaired as well, because I cracked open the second bottle. Then things got hazy. I remember falling down in the pit (concrete floors and skin – bad combination) and hanging from the rafters. I remember limping outside to throw up. I remember washing the taste of puke out of my mouth with more Crazy Horse. I remember kissing a lot of people. I don’t remember who. I remember the cops coming to break it all up. I don’t remember how I got home. I remember dry heaving into the bushes. Then I woke up on a cold hardwood floor with little men inside my skull using jackhammers to get out. Nothing to do but start again. I wandered around the house until I found an inch or two of the vile yellow stuff left in a bottle behind the couch. With a grimace, I lifted the bottle to my lips and tried to ease the pain.

I still go back to Maryland every once in a while to see how the scene developed. When I do go, I always get a 40 of Mickey’s (the price has since gone up). We sit by the riverside, sipping slowly, recalling the “good old days” of unemployment, hangovers, drug abuse, getting hassled by the cops, and all the other joys of youth. Then we get another 40 and relive the glory years. There’s nothing like it. Malt Liquor will always hold a place in my heart as the liquor of adolescence, the brown bag of childhood. I can still hear it calling. “Lex! Come back! We can crawl through the gutter together, just you and me! Come, come…”

Get thee behind me.

If you have stories of how some booze messed with your head, or how some kinds of liquor bring back childhood memories (or memories of any kind), send them into Lollipop and we’ll see if they can be used in the future. Remember, if you’re sober, you’re only seeing what they want you to see. 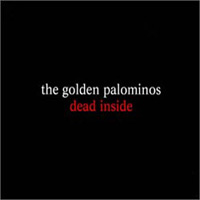 The Golden Palominos – Dead Inside – Interview 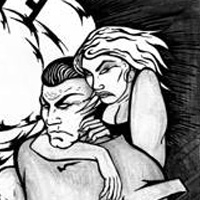 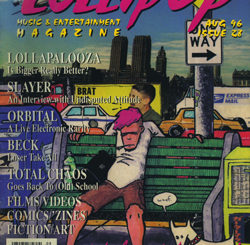