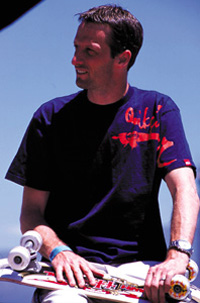 An interview with Tony Hawk
by Tim Den

The Michael Jordan of skateboarding, Tony Hawk can now add one more accomplishment to his ridiculously-long list of groundbreaking firsts. Unsatisfied with the limited “live show” capabilities of skateboarding exhibitions, he’s organized an arena tour of the sport’s finest and rock’s most muscular in a road show he calls Boom Boom HuckJam. On this tour, skateboarding will not play second string to pre-pubescent punk rock wannabes (cough [Warped Tour] cough). They’ll be the choreographed, graceful, awe-inspiring daredevils straight outta Hawk’s imagination. Is the world ready for arena skateboarding? Let’s ask the man himself.

What’s on Tony Hawk’s itinerary for today?
Skating, doing a photo shoot in a pool near San Diego.

Do you have time to just skate for fun?
I kept hearing about this pool… someone invited me (to skate it), and even though they’re taking photos, I just wanted to skate it. I try to skate as much as I can, just for the fun of it.

And how long do your runs usually last?
Usually a couple of hours.

After all these years of being at the top of the sport, do people expect you to push the envelop further every time you hop on a board?
I suppose, but my motivation is to just keep challenging myself. I’m not concerned with what people are thinking or how I compare to everyone else. I just set goals for myself and follow those. 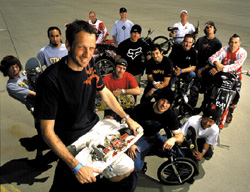 What are the goals for Boom Boom HuckJam?
To take traditional exhibitions and demonstrations to the next level. Be in arenas for big crowds, choreograph somewhat of a show instead of just skating for an hour and seeing what happens. We’re gonna have set routines, as well as sessions in the event that are more of a free-for-all, straight-up (runs).

How long is the show going to run, with so many athletes and events?
An hour and-a-half to two hours. That includes a band, too.

Which bands?
The Offspring did the first show, but I don’t think they’re gonna be on the tour. We’re gonna change up the bands every week (on tour), so every region will have a different band. Some of the confirmed are Pennywise, CKY, Face to Face, and Devo.

What initially gave you the idea to do a tour like this?
I always had the feeling that touring skate parks and doing exhibitions (in the usual locations) could only go so far, because they didn’t have the capacity to hold the crowds that were showing up. The next level would be to do arenas, where thousands of people can attend and we can create our own skate park. 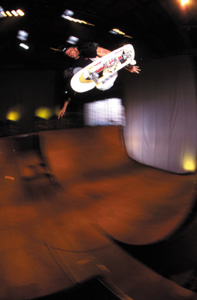 It seems like Boom Boom HuckJam is arriving at the perfect time, what with all the mainstream attention on “extreme sports”…
Yeah, it has been a strange ride these last few years. It became so publicly accepted and embraced, as opposed to a curiosity.

Why do you think that is? It’d be one thing if it was a gradual build-up, but it seems like it just exploded when ESPN started showing contests and exhibitions…

I think it’s a lot of different factors. Positive TV coverage, the onset of our sport as a video game genre, the rise of public skate parks all over the country… The accessibility is a big issue now, too. Before, even if you had the desire to skate, you just couldn’t find the places to do it.

Do you still see signs on the streets that say “no skateboarding”?
Oh yeah, but luckily – for the most part – there are other places to go now.

You once said that you never thought skateboarding was going to be more than a hobby. When did you realize you were wrong?
By the time I was a senior in high school, I was already making a pretty good living. I bought a house while I was still going to school. Everyone in my class was worried about where to go to college; I was already making more money than my teachers. 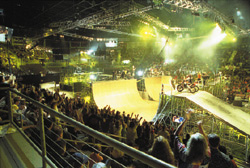 What’s up with your old Powell Peralta teammates?
Lance (Mountain) started a company called The Firm; we distribute our stuff together. Steve (Caballero) still rides for Powell and does heavy promotional stuff with Vans. Mike (McGill) has a skate shop; he just licensed some stuff with Wal-Mart. Tommy (Guerrero) runs Real Skateboards, and he does a lot of music.

None of them stuck with the sport’s spotlight and exhibitions like you, though.
Cab(allero) goes on tour all the time, but he doesn’t compete anymore. But yeah, I don’t know… I just can’t quit.

Why do you think they “quit?”
Uh, I don’t know… Maybe they felt like they weren’t improving enough to justify the competitions? I think all of us feel like we don’t want to be out there just for the sake of tradition. We only want to do it if we’re at the top of our game. I don’t compete anymore; I didn’t want to keep following that schedule, worrying about my placing. I want to skate for fun and not think about my standings.

It seems like none of the other (just as amazing) skaters hold your kind of status in the minds of the fans. The crowds would probably want you to keep skating, even if it’s just for the sake of tradition.
Even though I haven’t competed since ’99, I’m still out there doing a lot of exhibitions and projects. In that respect, I’ll keep skating until I feel I’m not getting any better. I don’t have any plans to bow out of those types of shows any time soon.
(www.boomboomhuckjam.com, www.tonyhawk.com) 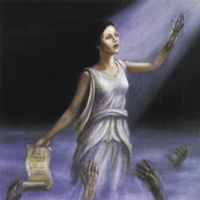 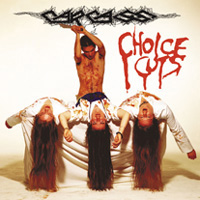