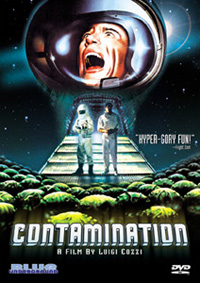 Blue Underground has done it again. Somehow they managed to put together a solid package for a rather obscure Italian “classic” (of sorts). The film is Alien Contamination, or simply Contamination, as the new DVD release is titled. The film came out in 1980 and was directed by Luigi Cozzi, a longtime friend of the Italian maestro, Dario Argento. Cozzi’s style, however, is more similar to that of another infamous Italian puke-meister: the late Lucio Fulci. In fact, the way Contamination begins, you’d swear you were watching the beginning of Fulci’s Zombie. The same New York waterway… the same unresponsive boat. Both films even have the same hero: Ian McCulloch. But then again, we all know that certain Europeans have no qualms about lifting ideas, characters, and even entire scenes from previously-made films. Cozzi himself says he saw how well Ridley Scott’s Alien did and he wanted that same type of success.

How successful was Contamination? Well, it may have done well overseas, but here in America, it was picked up for a lackluster video distribution in an edited form. It seems the censors here were worried about the violent content effecting innocent viewers. It’s a good thing those film butchers stepped in, too. Otherwise, there may’ve been a slate of copycat slayings in which victims were doused with extra-terrestrial egg juice causing their intestines to swell and burst through their chest cavities in slow motion. Thankfully, this new DVD has the full, uncut version of the film with all of the missing gore back where it belongs. The film looks great and sounds crisp, too (even though the original dubbing is a tad corny at times). Throw in a souped-up synth score from the legendary progressive rock band Goblin, and you have an entertaining helping of exploitation.

The story begins with the boarding of a deserted cargo ship by a special research group working alongside the police. During their search, they find one of the crew members ripped to bloody shreds. Then they come across a huge collection of torso-sized, pimply green eggs being transported under the guise of coffee. One of the rubbery eggs unexpectedly bursts, sending glops of goo-squirt onto some of the rescue members. Almost immediately, they begin to scream in agony as their insides violently blast apart, spraying giant geysers of gore and lumpy viscera. And so the mystery begins… Who the hell was moving these lethal pods and why? After running tests and exploding some lab rats, the government decides that the eggs are like nothing found on Earth. It turns out they’re from Mars, and at least one person won’t be surprised to hear about them. It seems there was an expedition to Mars that went awry. Two prominent astronauts discovered the lethal eggs in a mysterious cave. However, when they returned to Earth, one of the astronauts, Hamilton, denied it all, leaving his partner (McCulloch) to be declared insane. Now, years later, the same governmental agency that blackballed him must kiss his ass in order to save the world. McCulloch teams up with a ballsy, female research leader and a New York cop to uncover the culprits, thereby restoring his honor and credibility.

Contamination has a fun, low-budget feel. There is plenty of action and plenty of wall-to-wall splatter. You’ll also find a fair amount of humor (much of it unintentional?) as the characters say and do oddly European things. And how can you not smile when the mastermind turns out to be a gargantuan Cyclops with a six-foot mouth, phallic-like tentacles that suction and munch victims, and a glaring floodlight of a peeper. Yup, you can actually tell that his eye is a flood light… priceless. Not only do you get the fully-restored 95-minute unrated feature, Blue Underground has also included lots of extras. There is a graphic novel, a poster and still gallery, a theatrical trailer, an 18-minute interview with with co-writer/director Cozzi, and a 23-minute documentary on the making of Contamination which includes behind-the-scenes goodies.
(www.blue-underground.com) 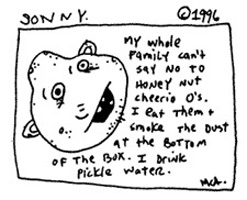 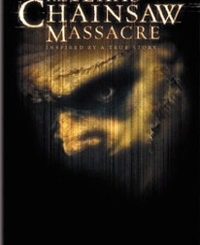