Heavy Parker is an immature, shit-talking, cheating, lying, coke-using, filthy trust fund baby. Oddly, he’s dating an open-hearted, 17-year-old honor student and cheerleader named Missy Cheung. Things seemed alright when they met: Heavy, with his Vancouver penthouse apartment, Range Rover, terrible punk band, and gaggle of mean-spirited, spitting, drinking bandmates, had all the girls he could want and considered himself the “punk rock king.” Missy wanted to act out against her “top 40-loving” friends and get close to what she thought was the anti-establishment chief of her town. Of course, he’s a designer punk – not the real deal – and a huggably drawn comic book character, to boot. So it’s no wonder that not only does Missy change her mind about him (after finding out he cheated on her with a riot grrl only hours after she told him she loved him), but she becomes an adorable punker, too, and prepares to kick his boyish pitard – Hello Kitty style (cute, cute, cute, piercings and all).

Just as Steve Rolston’s illustrations are so adorable they could practically be animé (even puke somehow looks charming), the official soundtrack to the punk comic is easy to get through, fun, buoyant, and not at all punk as Reagan knew it. The comic itself confuses me with its mixture of hard drugs, soft porn, misogyny, and goofy humor. Just as it could become edgy, floating hearts appear in the frame. It needs to decide whether it’s hardcore or flip, and so does the soundtrack, which bounces from pop to near-punk without ever really screaming anger the way Heavy seems to (or claims to) in the comic. Still, both are plenty of fun and the art smells of enough cigarette butts and beer to give it cred. But for real punks, this will look too cute and cheesy; only to outsiders will it seem like a frame-by-frame exposé of a dirty, underground world; a world that might actually be disappointingly huggable.

This is My Photo Finish – Fiction 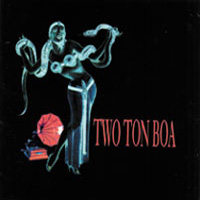