Every rock fan has the one band that turned them on to the art form, and usually at a very early age. For me, it was KISS at age three. I didn’t know who the heck these people were, and being three, it was just as likely I didn’t know much about their music in the beginning, either. I just knew, instinctively, that they were cool. That and they scared the bejesus out of me. (And I did come to like their music almost immediately.)

In 1976, I was given Destroyer by an older cousin and couldn’t have been happier. Take into account that my parents were Baptists who took those Satanic charges against the band seriously, and you could already see battle lines being drawn in the Deckman house over my KISS mania. Being under 10, they usually won these skirmishes. They had a habit of letting me have albums given to me (or ones friends would leave at my house, never to be returned), but forbade me from purchasing them. I could buy 16 Magazine and sometimes get away with putting posters of Gene Simmons on my door. In fact, at times the place would resemble a veritable KISS shrine, complete with tinfoil in the room’s ceiling corners, various KISS pictures up on the walls, and the Alive II gatefold prominently displayed on a dresser that was bigger than I was. But I couldn’t buy their T-shirts. It was a schizophrenic house in a lot of ways…

What’s this all mean? Well, I’m trying to impart the import of this band to millions of people, even to three-year-olds who didn’t know any better. KISS has always been many things: A good time, fun, meat and potatoes rock’n’roll, a pop phenomenon, and a joke all rolled into one. Dale Sherman, in this 10th anniversary edition of Black Diamond – The Unauthorized Biography of KISS, gives an exhaustive, behind the scenes account of the band throughout their impressive, sometimes tumultuous, history.

What Dale Sherman should’ve gotten, though, is a copy editor, as any intelligent reader is likely to get fed up with all the typos and grammatical errors that litter the book, all the more head-scratching given his proclivity for using [sic] when someone he’s quoting makes a grammatical error. And he doesn’t denote it correctly, either. Unintentionally ironic and endearing? Maybe. But that kettle’s still black, Sherman. That’s my main pet peeve with the book, and as a writer myself, I just can’t not mention it. Every writer makes mistakes, but good writers make fewer. These careless errors give an otherwise entertaining book an amateurish hue I’m sure the author would abhor. Getting it right matters. Not all rock fans are rock heads (pardon the pun, Eric Carr).

That harangue out of the way… Black Diamond really is exhaustive and informative. I’ve read several KISS books and still got a lot out of this one, especially information on what members who left the band ended up doing in their solo careers. Let it be known that while this is a KISS fan’s book, it may not necessarily be a rock fan’s book. Sherman obsessively details nearly everything about KISS, from their biographies and records to various costume changes and stage shows which continuously evolved through the years. It may get a little old, but members of the KISS Army will likely lick it up. (Okay, okay, I may nail Sherman for sloppiness, but I’m going overboard on the puns. We’ve all got our little vices.) And he doesn’t just highlight the makeup years, either; just as much detail is given to the non-makeup epoch as well. Whether I care what ridiculous ’80s metal garb Paul Stanley is wearing on the Animalize tour is another question, but when you read Black Diamond, you’ll be swimming in KISS minutiae you likely didn’t know existed.

The book recounts the band’s beginnings as a struggling outfit in New York City and sheds a little light on their influences like the New York Dolls and Alice Cooper, and gives you some information on Casablanca honcho (and early KISS champion) Neil Bogart that you may not have been aware of. For instance, in the lean years, while on vacation in Acapulco during a scuba dive, Bogart cut his air and sank to the bottom of the ocean, having had enough of the label’s impending failure. After all, he basically put all of his money (and a bunch of other people’s money) into the venture, not to mention suffused the project with his carnival barker zeal, all seemingly for naught. Well, that’s not totally accurate. He got something out of it alright: A heaping slice of industry ridicule. But Bogart thought better of it, got a spontaneous new outlook, and came back up for air. Good thing he did, because soon the “Bubblegum King of America,” what he was known as in an earlier incarnation as a producer of pop music, would reap the benefits. I’m referring to, of course, the success of Alive!, which finally broke the band, and then Destroyer, which solidified their standing as a worldwide phenomenon. Those two records (which according to the Recording Industry Association of America database went gold (Alive!) and platinum (Destroyer), though other sources have both albums selling in excess of 1 million) may’ve even been topped in 1977 by KISS being named the most popular band in the United States in a Gallup Poll.

Though on the aforementioned two records, Sherman begins a tale of controversies that still surround the band, namely that Alive! was doctored in the studio, and the fact that Ace Frehley didn’t play on “Sweet Pain,” track six from Destroyer (for what it’s worth, Peter Criss claimed Gene didn’t always play on every album track, either. Another quick point, Sherman has Destroyer‘s release date as March 15, 1975; it was actually released on March 15, 1976). And studio chicanery would be commonplace on subsequent albums for the rest of the band’s career. Both Criss and Frehley’s departures are recounted, along with their probable reasons for leaving. Likewise, the arrival of each new member and their biographies are fully covered, too. Especially poignant is the attention given to Eric Carr and his history prior to joining the band, including a deadly fire he was lucky to escape at Gulliver’s, a Port Chester, New York, club he was performing at in his days with the band Creation. (A lengthy 1990 interview of Carr is added to the book as an addendum.)

Sadly, according to Sherman – who clearly has an affinity for “the Fox” – Gene and Paul treated Carr rather shoddily during his illness and after his death. While in recuperation from cancer and with the band insisting he was physically unable to work on the Revenge record (he claimed otherwise), Carr had to deal with rumors that he was going to be replaced. Music is a business, but still, ouch! Though, in fairness, the author claims the duo advanced royalties from previous recordings to help him pay for treatment. Still, according to Sherman, the band, who were undoubtedly grieving themselves, turned down requests to play a tribute show for their fallen comrade after his death in 1991.

Not to belabor the point, but the thing that really makes this book worth reading for fans is the copious detail given not only to the band itself in their many incarnations, but to those who left the fold. Sometimes it borders on the absurd, I mean, how much of a fruitcake do you have to be to care about the intraband politics of the Vinnie Vincent Invasion or Mark St. John’s contribution to everyone’s favorite burger-eating drunkard David Hasselhoff’s “Is Everybody Happy” video? Alright, I’ll confess, that last one is an interesting tidbit we certainly couldn’t have lived without. Sherman leaves no stone unturned in his pursuit of KISStory.

And he also chronicles the famous 1996 reunion tour and subsequent sojourns with the makeup. Of course, we also get the dirt on why the foursome couldn’t make it work for long (egos all around, sideman status for Ace and Peter, physical injuries and maybe a fall off the wagon for Peter as well). And speaking of Peter Criss, he may’ve unloaded the biggest surprise of all. Sherman has Peter claiming that Gene and Paul weren’t even speaking to each other in his last stint as drummer for the band, despite the united front they posited (and still do) to the media. For the record, as of 2009, KISS consists of Gene Simmons (bass/vocals), Paul Stanley (rhythm guitar/vocals), Eric Singer (drums/vocals), and Tommy Thayer (lead guitar/vocals).

Anyway, despite its problems, Black Diamond – The Unauthorized Biography of KISS is still an enjoyable read for fans of the Hottest Band in the World.
(www.cgpublishing.com)

Violent Femmes – We Can Do Anything – Review 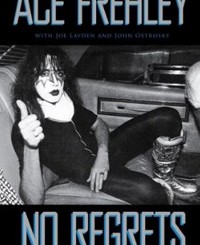