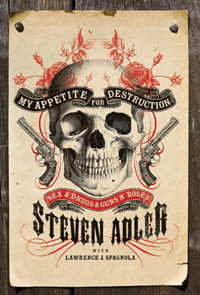 by Steven Adler, with Lawrence J. Spagnola (It Books)
by Scott Deckman

Say one thing for Steven Adler, drummer for the original lineup of Guns N’ Roses: He tells it like it is. At least, according to him, which is something you have to keep in mind regarding any memoir. Not that I have reason to disbelieve him, but reading and watching enough accounts of the Guns N’ Roses story, and even having lived through it myself, it’s funny how everyone can view the same events differently.

Now, early on Adler admits “I’m the undisputed all-time booze-chugging, pill-gobbling, drug-shooting, Katrina-caliber fuckup.” He also admits that “Throughout my wretched life there isn’t a friend, family member, or fantastic opportunity that I haven’t shoved into a blender and mutilated.” So while he issues that staggering mea culpa, he also throws darts back at the rest of the degenerates in the band. To believe him, he was a scapegoat heroin addict who got booted for behavior the rest of the guys partook in because, in his case, it affected his playing. Ironically, it was an opiate blocker he was prescribed before the recording of “Civil War” (which made him sicker than a dog) that hampered a drummer’s raison d’être – his ability to keep a steady beat – that was the final straw.

Adler also claims he was tricked into signing away his association with the band (and royalties) for a meager two grand (and this after Axl famously cut into Adler’s – and nobody else’s – royalties earlier). Not in the best of shape (he was coming off heroin and didn’t have time to read the documents fully, he says), Adler says he believed he was signing a waiver stipulating he’d be fined two grand every time he messed up in the proceeding four weeks. That’s pretty cold, if true, but Adler never did himself any favors. (Though, at the behest of his mother, he did later file suit and was awarded 2.5 million in damages and had his 15 percent continuous royalties restored.) And say what you will about his scapegoat charge, but he’ll never live down the sobriquet of “the guy who got kicked out of Guns N’ Roses for doing drugs.” That’s kinda like Norm Peterson getting kicked out of Cheers for drinking beer.

A very personable book, Adler takes us through some pretty embarrassing stuff, about his early childhood problems with authority, being bounced around from his parents to his grandparents, he even admits to being abused and engaging in homosexual acts with older men when in his early teens. He claims this experimentation – including an incident he’s mainly blocked out which was probably downright rape – was centered around drug use and despicable chicken hawks. It takes balls for any straight guy to admit to this type of behavior, especially past puberty when most of us have already figured out what we like. This experimentation – exploitation, whatever it was – seemed to end as soon as it began, and then we get a load-full of sexual escapades with women, who for Adler seemed to be as big a vice as heroin. In fact, he lost his virginity in middle school to a 12-year-old girl, and soon he was banging women.

Adler was a dirty bastard in a lot of ways. And just think, without this hairy, smiling drummer, we probably wouldn’t have had a Guns N’ Roses, or at the very least a different one, not to mention maybe the last unashamed guitar hero (he did introduce Slash to the rest of the band). Adler tells of first meeting Slash at a local school where skateboarders and BMX bandits held court, and how the relationship grew. (They were also friends with Flea from the Red Hot Chili Peppers.) And despite being fucked over by the top-hatted guitarist later on down the road (according to him), you can tell he really does love him some Saul Hudson. He chronicles some of their escapades as teens (alcohol abuse from an early age, scoring chicks), as well as their flirtation with rock’n’roll and how they settled on – and became good at – their instruments of choice.

In a previous account of the band I remember, Adler was described as an energetic puppy dog. If anything, the drugs may’ve made him easier to take in some ways. And it’s literally impossible to see how this guy could’ve gotten along with W. Axl Rose, whether on the sauce or stone cold sober. Again, I can remember reading that Axl seemed to take sadistic pleasure in beating up Adler, but here we only get one incident relayed, where seemingly apropos of nothing, Axl up and kicks him in his balls. Ouch! If he did that to me, Axl wouldn’t have been able to sing properly until the lunatic got some substantial bridge work. But Adler seems uniquely qualified to elicit this type of response from people. We get the band’s origins from Adler, even the first meeting of him, Slash, Izzy, and Axl, and later, Duff McKagan.

The story of Guns N’Roses is one steeped in rock mythos, and one we never get bored of for some reason. Maybe it’s because Guns N’ Roses were the last great band devoid of irony (well, “I Used to Love Her” might qualify), they were hair metal’s last hurrah before the onset of the serious artistes of grunge, many of whom you wanted to kick in the balls themselves for their pretention. Paging Mr. Rose, Paging Mr. Bailey! Guess what? Who gives a shit? It’s okay to like both. There are more important things in life, believe it or not. And Guns N’Roses weren’t your typical hair band either, but a witch’s brew of influences: Metal, punk, arena, pop, blues. And at least the metal bands – including Guns N’ Roses – were honest: They started this shit up for pussy as much as a love of rock. Although Axl thinking, initially at least, that Nirvana would want to tour with them shows you how clueless they may’ve been about a lot of things and how fame can indeed fuck with your head.

So yes, we get the lowdown on the band’s origins, that fateful trip to Seattle to play their first out-of-town show when the car broke down and hitchhiking ensued, we read about the shows at the Troubadour, hanging out at Hell House and the Cathouse and the indiscriminate sex with groupies, the substance abuse. These were sleaze Gods. And damnit, Adler loved every minute of it. Who’s gonna turn down hot chicks and freebies of the chemical variety left and right, particularly someone as shallow as Adler? But these were uneducated kids dealing with enormous corporate pressure to perform. That can’t be easy. Still, what a hedonistic thrill ride. Adler details playing with the Rolling Stones and Aerosmith, and even how he let sometimes-junkie Steven Tyler down by using drugs. And H wasn’t the only vice as his previous statement in the forward alludes to: There was also cocaine, crack (not the same thing, he says), marijuana, and booze.

After his firing from the band in 1990, Adler fell into a nearly two-decade bender, which consisted of run-ins with the law, copious sex, and overdoses (some of which featured horrific convulsions), all to fill the void. While being treated in the hospital for the ravages his drug abuse brought on (along with prescribed lithium, which Adler claims he was allergic to), he eventually slipped into a coma his doctor thought might’ve been permanent. While in nature’s ether he had a fantastic dream which sounds like an out-of-body experience (yeah, yeah, so cliché. Get over it). In fact, during this episode, he suffered a stroke which today has left him with a speech impediment. After pulling out of the coma, the fool even received a plaque reading: ANYTHING IS POSSIBLE (his caps, not mine). So how did he repay this gift of life? He continued using drugs. Nikki Sixx has a compadre (and yes, the two partied together, with Sixx even od’ing and Adler saving his life). And anyone watching VH1’s Celebrity Rehab, and especially the follow-up Sober House, viewed the damage done during those wasted, hazy days and nights. At times during the last two decades, Steven Adler was out of control and headed for death. In fact, he cheated it.

Where does this all lead? Dr. Drew Pinsky and redemption, of course. Today, Adler seems to be sober and doing better, playing with the cheesily-named Adler’s Appetite. Despite his haggard appearance and overall rough visage, he was still able to marry a pretty Argentine (who I believe to be about a decade and half his junior). On the VH1 shows, she seemed a sweet thing. Money and fame are still worth something, eh playa? Let’s hope this degenerate has turned the final corner on Substance-Abuse Highway, and that his only high from here on in will be the one he gets onstage banging those drums, the one he describes in the book’s forward as the greatest high of all.
(www.harpercollins.com) 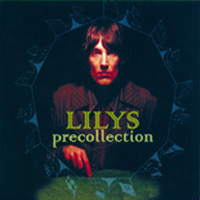