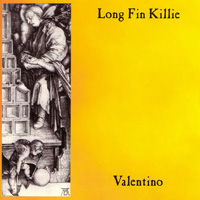 One of the things I’ve noticed about your music is the repetition of certain phrases. On Valentino, you use “kitten heels” and “a thousand wounded astronauts.” Is this to bring the album together as a whole?
It’s sort of a continuation of the music. Houdini was mostly about racism and sexism, and Valentino is a continuation of that, with the focus a little more on the sexism. Houdini was called that simply because one of the pivotal songs was called that. Valentino is much the same, dealing with the portrayal of images, and media, and the roles in movies that show these reclining, passive “queerness” images. They have this insidious and almost subliminal effect, so people become objects in a subjective way. It becomes circular, and contributes to the problems of communication between men and women. But I’m not moralizing, by any standard. These are just observations. I don’t have any solutions, it’s just something I have an interest in.

The phrase that kept jumping out at me was that you’re “allergic to lipstick.”
Well, the way these songs work, it’s like filling characters with sound. The voice is at times homoerotic, and other times absolutely the other way. “Allergic to lipstick” is a metaphor for a kind of quiet misogyny, in that women are still considered to be a second class. But it’s also a metaphor for being allergic to all kinds of differences, because I’m saying I’m allergic to his lipstick.

Valentino is a much darker album. On the title track, even though the music is very pretty, the lyrics (about gay bashing) are very disturbing.
That’s highly on purpose, I guess. The music’s very organic. We make up songs by jamming the grooves. It’s quite groovy, quite trancey. We take all the bits we like best, and then roll them into a song. Very often, the bits we use and like the best, are the ones with the biggest contradiction in sound, or certainly when you describe them they sound like contradiction. Like (on Houdini) “Heads of Dead Surfers,” you have this classical sounding violin, tribal, hip-hoppish type drums, bass being played with a stick, a guitar that sounds like it’s sampled… 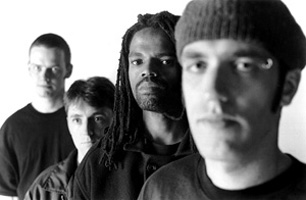 And Mark E. Smith (of The Fall).
Right. So it’s all over the place. On paper, when you try to describe all this, you’re like “What the fuck is going on?” but when you hear it, it’s all congruous. So from what happens organically there, I derive the lyrics. Sometimes the voice is almost wispy while saying something very cruel, like on “Valentino.”

I heard that you recently got a new drummer. Has his new style changed the sound at all?
No, it’s like, times two. Dave wasn’t really enjoying it, so we parted company, and we got a new drummer. And I was so afraid, because for me, the rhythms of the songs are the most important. With the new guy, Kenny, I didn’t want to hype him up and say “Oh, the drums are so important, blah blah blah” so I just brought him in, gave him the album, and he was wonderful. It’s like he took off where Dave stopped. And we’re still working in the usual way, where everything’s a democracy, throwing in our own ideas. Usually the bass groove will come first, and then the drums will play over it, but it changes.

Why is the song “Fresher” only on the U.S. release?
Well, some people here in the States felt that it would do better commercially here. For me, it’s a song that I’m not really happy with. It could have gone further. It’s okay, but I don’t think it’s amazing.

Back to the lyrics for a moment. What do you mean by the phrase “a thousand wounded astronauts?”
They’re football supporters. What it is, in Britain, football is the last bastion of male celebration. We’ve got this male backlash thing going on as women start to become more of the power structure. And men tend to regress as a reaction. They get this “Bloodsport, Bonding, Booze, & Babes” attitude, and again, I’m not moralizing, but it seems an awfully backward thing to do! “Astronaut” is a Scottish phrase for “space cadet,” just an idiot, doing the macho thing. And “Wounded” because it’s no longer this pristine, Charles Atlas type of thing. The mentality is not there anymore, there are chinks in the armor. And of course, “a thousand” is just a metaphor for the number of men out there doing this.

I saw you on your last tour for Houdini, and…
Wait. Is this Lex Marburger? 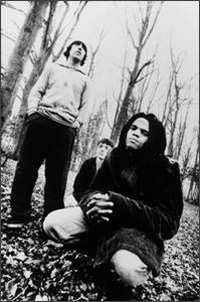 Yeah…
LEX!! How you doing!? No way man! I didn’t realize it was you! American and Too Pure sent me loads of reviews, and a lot of them were really good, but they kind of missed the point. A friend of mine sent me a cutting of Lollipop with the review you gave Houdini, and you totally hit it. Nobody else did. In amongst all the guitar noise and stuff there were saxophones, violins, and it wasn’t noise for noise’s sake. I was so relieved to see that second review when we played Boston. It’s hard to replicate exactly the way they were recorded, so our live sets are often very different from the album. I was considering putting a reference to you in one of our songs.

Anyway… When you’re rehearsing for your set at Lollapalooza (second leg), do you rehearse the different ways you’ll be playing the songs?
Well, we use violin, mandolin, bouzouki… and we use all of these on stage. But on record, we use a lot of overdubs. For example on “Corngold” (Houdini), we have all these instruments going on as well as vocals and guitar and bass, but there’s no way we can hope to do all that live. There aren’t enough of us. So we take the core of the song, which is guitar and bouzouki (and vocals) and we do that. Then we add this four note bassline and the drums start out on cymbals and then move to the whole kit. So you’ve got this track that’s like seven or eight minutes long that builds and builds, and the whole band is trancing out by the end. And it sounds completely different from the album. People come up to us at the end of the set and ask, “What song was that? Will it be released on the new album?” and I guess the beauty of it is that it isn’t going to be released, so there are two distinct versions.

So how are you going to treat your Lollapalooza set?
It’s going to be a load of people who wouldn’t normally come to our shows, and it’s going to be in the daytime, so the whole mystique’s gone. We’ve been kind of. . . advised (laugh) to keep things “straight-forward,” to stick to the “rockin’ hit singles” kind of thing, so I guess that’s what we’re going to do, most of the up-tempo ones. But we’ll be supporting someone after the Lollapalooza tour, and we’ll do the whole thing then.

Any last remarks on the album, or anything else?
Yeah, how do you think Valentino compares to Houdini? 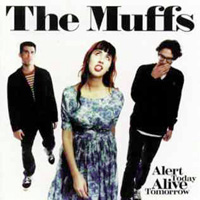 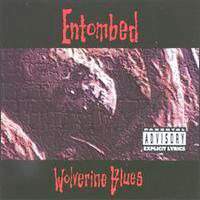 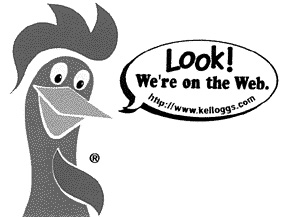