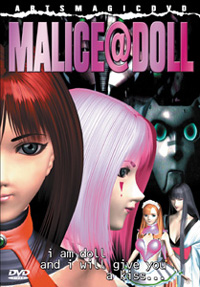 Here’s an odd little flick. Malice, the title character, is a robot prostitute made human by a rape at the hands of… well, not the “hands” of, more like the multiple penises (penii?) of… y’know what? Forget it.

I’m just going to say this flat out: The plot doesn’t interest me. I do, however, kinda like Malice@Doll, because there’s a quirky, geeky atmosphere to it that comes off like some kind of sick film noir. The visuals are dark to the point of incoherence at times, but where this would normally be a severe liability, it actually pulls you in. I never got tired of trying to decipher what the hell I was looking at.

This film is all about the visuals. Considering the jerky, blatantly computerized look of it (think of the sterile, smooth graphics you’d see in “virtual reality” demos in the early ’90s), it’s impressive indeed that it’s difficult to tear your eyes from the screen. This is because the influences are all over the map: Blade Runner, kabuki theatre, Yellow Submarine, Terry Gilliam’s work with Monty Python, The Sims, Gothic architecture, Mario Bava (the film even steals the creeped-out little girl from Bava’s Kill, Baby, Kill). Granted, these influences are not exactly unheard of in the world of anime, but (in my limited experience, anyway) they usually come off as tacked on, poorly digested, and forced. Not so here. Blurry, impressionistic backgrounds support blocky, too-perfect figures, and it actually works. Hell, the same characters even look like they were created by different artists at different times (and maybe they were), but it always seems weirdly appropriate.

I should state that, outside of a vague familiarity, I actually don’t know shit about anime, so maybe I’m praising what a true “otaku” would consider a hack job. But dammit, I liked this. Go figure.
(www.artsmagicdvd.com) 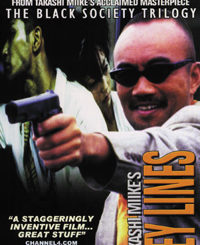 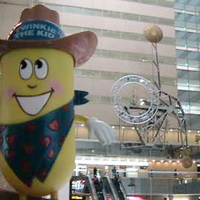