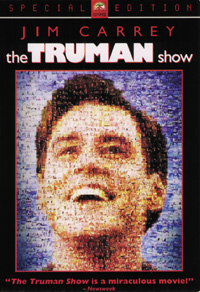 Well, THIS isn’t something I expected to find in my Lollipop care package: A reissue of Peter Weir’s The Truman Show.

When The Truman Show came out in 1998, Jim Carrey was still just a clown. This was his entry into serious acting, a’la Tom Hanks, and it worked (even if he did later fall flat on his ass with the craptacular The Majestic). The Truman Show got a lot of attention, being hailed as the kind of masterpiece that made A STATEMENT, putting it in the ranks of such lasting satires of mass media as Network and The Stunt Man.

So, here we are, seven years later. Does it stand up? Yes, it does, although, like The Stunt Man, its statement says more about man’s place in the media than it does about the media itself. It’s also occasionally heartwarming, which doesn’t exactly give it too much cred in the “harsh truth” sweepstakes. But that doesn’t really matter: The film is, uh, carried by Carrey’s surprisingly warm performance, and Weir keeps the Spielberg-esque boy-wonder-in-bizarre-circumstances structure on the right side of sentimentality. It’s the rare film that you can watch with your Mom that has a legitimate point, and doesn’t pull punches (or compromise its reason to be), just because it’s got a good heart.

Time HAS accented some of the flaws, however. The normally excellent Laura Linney is all ’50s TV schlock, making Truman’s wife a one dimensional floor wax ad. This is undoubtedly intended to contrast with Truman’s humanity, but it’s too exaggerated. The film makes the nearly impossible scenario seem feasible, but Linney seems to be stuck onto the film stock with Scotch tape.

Also, the supporting actors (in the Truman Show itself, not the Truman Show film) seem a bit cold for people who’ve grown up with him. Again, that’s probably intentional, but it just doesn’t ring true.

Overall, though, I’m pleased to report that it’s still a damned fine film. It’s also a reminder than mainstream films can, occasionally, be worthwhile. Check it out.
(www.paramount.com) 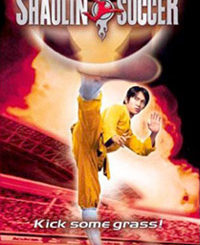