I guess that it’s the same in any form of pop culture, but it nevertheless fascinates me that the best publications will be produced by Fantagraphics one season, and then be outdone by NBM Publications or Top Shelf the next.

Over my shoulder, Real Stuff by Dennis Eichhorn and a host of artists (www.swiftymorales.com) was the title that could not quite be beat. There are quite a few raconteurs out there telling their tales and having them illustrated. “My Cancer Year,” written by Harvey Pekar and illustrated by R. Crumb a few years back, comes to mind as a successful collaboration. Hey, they went on to collaborate in the successful indie film American Splendor, which was a strong hit.

Real Stuff are the stories of a far more multi-faceted character, though. He’s a brawler, a jock, a bartender, user, companion, and general hang-out guy, and he draws on his own escapades and adventures in the Northwest. The material all originally appeared in publications like Real Stuff, Real Smut, Scram and the Northwest Extra. Meshed with tight, tough tales of insight and macho derring-do is the fantastic interpretation by such artists as Peter Bagge, Peter Kuper, Joe Sacco, and Mark Zingarelli. This shit is masterful.

So far this year, a strong contender would have to be the fine work by Graphic Classics (www.graphicclassics.com). Their most recent is volume 12 in their series Adventure Classics. The cover certainly has the style and flavor of the old male pulp magazines like Man’s Adventure, Saga, or other pot-boilers of a by-gone day.

Adventure Classics is perfectly named. These are old stories by Rudyard Kipling, Arthur Conan Doyle, and O. Henry illustrated by current illustrators like my logo artist and friend, Hunt Emerson, and the talented Mary Fleener. Both are of the “established” underground comic artists movement.

Hunt’s rendition of the classic The Shooting of Dan McGraw is a tad light and cartoony for me. Mary Fleener’s interpretation of Rudyard Kipling’s Gunga Din, though, is right on the money.

My friend Rick Geary has done another masterful job of his Victorian Murder series, The Murder of Abraham Lincoln, for NBM’s Comics Lit series (www.nbmpublishing.com). As usual, Rick’s slender pen style leads itself to imbedding a magnitude of detail to another historical killing tale. Also, in his usual style, he raises controversy over a mysterious death, as he did with the cases of Jack the Ripper and Lizzie Borden.

Not to stop there, NBM also has Boneyard out, a spoof of horror clichés in which a young man inherits a cemetery inhabited by frightening but charming monsters. Some of these issues are in black & white at $9.95, but bypass those for the full color beauties for $11.95. Their website, www.nbmpublishing.com, always has something new up its sleeve, as well. This season will see the release of their “Attitude Series,” the outrageous Rehabilitating Mr. Wiggles #2. It’s 11 x 8, 96 pages, a B&W tradebook for $10.95. This is a weekly alternative strip that runs in alternative papers like the Razor Magazine, Real Detroit Weekly, and the NY Press. Trust me, this item is totally weirded out.

On another hand, there’s a new title out by Andrew Drozd, Coexisting, for $2.99, which details the merging relationship between two college students. One of them is stupid enough to write an offensive rebuttal to the authorities over his traffic tickets. (Solid planning, dude!) The other one defends a nut-time religious order that is best unrevealed here.

Further titles from www.indyworld.com include Stickleback by Graham Annable, which at $6.95, has to be the worst investment since shares in the Ford Edsel. Then there’s Strange Day by Damon Hurd and Tatiana Gill, but at $3.95, it’s a bit sweet for my taste. Better is Escalator by Brandon Graham, but that’s a hefty $12.95.

Drifting away from “sweet,” with real relief, is an item from the great Last Gasp catalogue (www.lastgasp.com). Their catalogue itself is almost collectible. 8 1/2″ x 5 1/2″ and probably free for the asking, it features items in color with a great Robert Williams color cover and 32 pages of deviant material covering tattoo art, underground comics, poster art, etc.

Last Gasp is currently carrying the Dark Horse title, American Splendor, by the aforementioned Harvey Pekar. This issue focuses on a tale by Robert McNeill and his experiences as a soldier in Vietnam ($11.95 pp). As you know, my personal standard is to report, but not recommend, any title that I’ve not physically seen. Hey, Dark Horse, are you awake out there?

While Kitchen Sink is down the drain as a publisher, Rip Off Press is still out there distributing and even publishing occasional titles. One of their real assets is Gilbert Shelton, who created the hilarious Fabulous Furry Freak Brothers comic series. They now have Not Quite Dead #5 in which Gilbert Shelton collaborates with French humor artist “Pic” about a rock band. The band performs at such gigs as a biker barbecue, a wedding, and a New Year’s Party.

I’m probably going to spring for a copy of Cannabis Companion Book, $16.95 for a “gorgeous little full color trade paperback that will tell you everything you wanted to know about marijuana.” (Even where to get superweed for $125 an ounce?)

Further, Rip Off Press has the Festival Ritual Book out for $9.95, with heavy color covers. This is allegedly a “wild adventure on the British Rock Scene with Hunt Emerson’s Pilgrim and son. The aging hippy and his punk son dig the music, drugs, and general anarchy of Festival Season in England with a healthy dose of psychedelics to help them along.”

I just heard of a new publication, Students of the Unusual, an independently published horror comic that claims to be influenced by underground comics and the old EC horror line of comics from the ’50s. This is #6, an anthology of short stories edited by Terry Cronin. The contributions appear tight and professional. Check out www.studentsoftheunusual.com, $2.95 cover price and available at most major comic stores. I know, it sounds like a publication devoted to Irish cooking, but give it a chance. More on this next issue!

Drawn & Quarterly of Canada has a new book out by one of the original punk artists of underground comics, Gary Panter, titled Satiroplastic. It’s his sketchbook, one of three, from December 1999-November 2001.

Always there, www.topshelfcomix.com has a new title out that’s too cute to pop. It’s Any Easy Intimacy by Jeffrey Brown and it’s $12 for a 6″ x 4″ booklet. It’s small, but it packs a punch in a relationship-oriented way.

You want to check my kinda stuff out? Go to www.linesonpaper.com and peruse that site’s oddball offerings. I snapped up a 7″ x 7″ poster by S. Clay Wilson for $25 pp. There’re also a lot of underground-oriented tee shirts, mugs, and posters by such wacko’s as Wilson, Denis Kitchen, R. Crumb, and the late, totally weird Vaughn Bode. 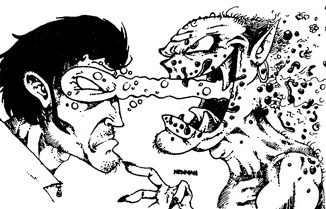 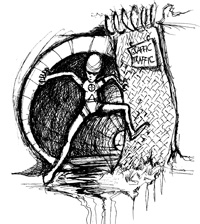 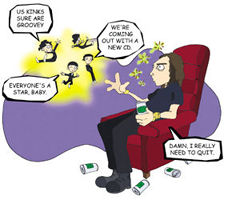