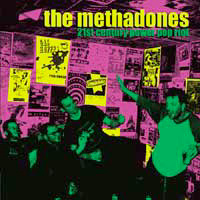 They just don’t make ’em like this anymore. Couple of these guys are veterans of pop punk (well, since the early ’90s): Vocalist/guitarist Dan Schafer aka Dan Vapid was in Screeching Weasel and Riverdales, two of my faves bands from those days, plus guitarist Mike Byne was in Vindictives, who I always liked, but who never really nailed a good record deal, so most of their stuff wasn’t appreciated by nearly enough people.

The Methadones are from Chicago, they have releases on Thick and A-F, guest vocalists include Patrick from Dillinger Four and Annie from The Soviettes, and they’ve shared the stage with The Queers and The Lawrence Arms. Oh, and the guy Toby who runs Red Scare works at Fat. Have I cross-referenced enough? Whoa-oh bubblegum punk like ya rarely hear anymore. Ya don’t realize just how bad punk has gotten until ya hear something like this and remember Fall Out Boy are simply not funny, and none of the snot-nosed little shits on the Warped Tour can pen an effortless, simple love ditty without test-marketing it on MySpace first.
(www.redscare.net) Scared of Chaka – Tired of You – Review