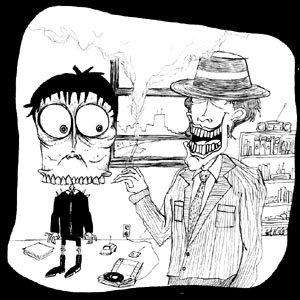 When I got home that night, I felt a strange sense of deja vu. Going to my bed table/desk/the only flat surface uncluttered with overflowing ashtrays, How-To books, and miniature busts of people I’d never met made from pocket lint, I removed a cream-colored folder from the box beneath that I’d gotten wholesale ’cause I’d never liked the taste of manila and hastily scribbled “The Case of the Stolen Store” on it. I stuffed the bar receipt, her home, work, and therapist’s numbers, and the sketch I’d done of her on a table napkin into the folder and filed it in the filing cabinet. Crammed is more like it. One of these days I was going to have to devise a new, terribly clever filing system. For now, all the folders began “The Case of the” and it was becoming increasingly difficult to find anything. Not that I ever reviewed any old files. With the combination of a sharp, photographic memory that never seemed to run out of film when there’s not a drug store handy and the fact that I never kept any useful information on cases I wasn’t working on anyway, I’d never really needed to. Review my files, that is. Just for kicks, I thumbed a few files while no one was looking: “The Case of the Stolen Stole,” “The Case of the Stolen Case,” “The Case of the Missing Link,” and “Where the Hell Did I Leave My Keys?” I paused for a moment on the last one, then licked the blood from the paper cut I’d just given myself. Ow. I sighed heavily and decided to file that one under “Unsolved.”

There was a sound behind me and I spun like a cat. Like a cat shrieking because you just ran the vacuum cleaner across its tail after hog-tying its paws and putting a burlap bag over its head to completely disorient it, but like a cat none the less and none the more. From my strategically-chosen vantage point of the floor, curled up in the fetal position and wetting my pants, I watched two powerful legs stroll into my room and go into the kitchen. “Thanks,” a voice said, “I’ve been working out and I’m glad it shows. I’m going to act assumptively and fix myself a drink in your kitchen, would you like one?”

“Sure,” I muttered, dislodging myself from beneath the bed.

“What was that thing about the cat, anyway?” the voice asked.

“Nuthin’,” I muttered, telling myself I really had to control talking to myself.

“You should,” the voice continued from the kitchen, pausing only to admire my vast assortment of popsicles while getting ice, “it’s helpful to the reader, but sure sounds silly to the rest of us.”

I stood, brushing the tumbleweeds of dust from my clothes, and approached the kitchen warily. I should’ve never fired that cleaning lady, I thought carefully to myself and only to myself, even though she did mop the ceiling, speak backwards and in Braille, and had the nasty habit of throwing away all my belongings and leaving the dirt neatly sculpted into the shape of my furniture. I brushed off one hairball nearly the size of a cat, and as it hit the floor, it limped clumsily into the other room, bonking its burlap-bagged head into the door frame as it passed.

“That you?” asked the voice from the kitchen, now entering the bedroom with the rest of its body which carried a couple drinks.

“What do you want?” I asked as boldly as I could, hoping the typist would notice the power in my voice, the threatening pose I was assuming, and the sneer I hoped didn’t make me look like a rabbit. 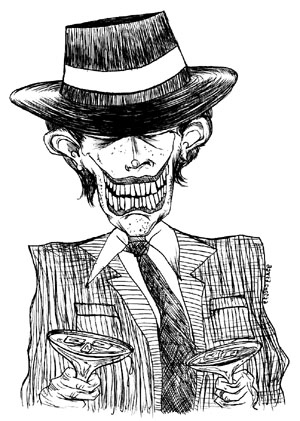 The voice and body carrying a couple drinks stepped into the waiting pool of light and stood a moment, bathing in rivulets of incandescence. It was the sharply-dressed guy in the somberly pinstriped suit from the bar. It was…

“Tommy TuTone. Nice to finally meet you Mac,” he said with something that looked like a devilish grin, but it was hard to tell in the poor light.

“A stick figure of speech,” he said dismissively. “We need to talk. And don’t you get any well-lit ideas about starting another chapter. We need to establish my motive so I’m not so two-dimensional. Sit.”

“As you know, partly because I told you and partly because the as-yet unnamed woman in the bar with the deep blue or green eyes told you, my name is Tommy TuTone.” He paused dramatically and I took a drag off the cigarette he’d asked me to smoke for him. Somewhere a dog may’ve barked, but a big truck was passing and we didn’t hear it. “You saw a colleague of mine get the breathing treatment at the bar, so you know what I’m capable of. I end sentences with prepositions and I leave my participles dangling whenever I want. I’m a bad guy with a good tailor, James, who’s also working on my sensitive side, but that has little to do with anything at the moment. I only tell you this to continue my monologue so you can’t exhale.”

He grinned. I exhaled. He inhaled. I grinned.

“You have a twisted sense of humor. I can tell by the way you grin with only one side of your mouth. I like that.” He smiled broadly, showing a little teeth. “I also like the fact that you keep your mouth shut, don’t give anyone any lip and only a little tongue, but only once you get to know them. In another story, we might have been friends.”

He reached into his pocket and withdrew a cigarette saying, “I’ll smoke this one for you.”

I was wary of TuTone doing favors for me already, but I’d learned to keep my mouth shut since that time I was riding my bike and a bug flew in and…

“Stay with, Buddy. You were getting those wavy lines like you were going into a flashback.”

“Whatever,” he replied, casually opening the window and throwing his cigarette out. “This is my dialog and I won’t play second fluglehorn to anyone, regardless of how many vowels are in their name. What the as-yet unnamed woman with the deep blue or green eyes told you about her family is true. What she didn’t tell you was why. Unfortunately, I’m not going to tell you either because that would reduce the air of Mystery I like to smell of.”

And that’s when I noticed it, beneath the aroma of soft soap and buttered popcorn was the undeniable scent of Mystery, an aftershave too pricey for my wallet yet not small enough to be slipped in there while the countergirl wasn’t looking. Mystery: a fragrance of unfinished sentences, playfully tossed off innuendoes involving a clergymen, a construction supervisor, and a tube of toothpaste, and the dark, cloying aroma of exotic coffee brewing in cafés with names you can’t pronounce and the high-sakes, big-money, and large tax write-off deals that went down in them.

TuTone was smiling again when I’d finished sniffing him out. He knew what I knew. He was well-dressed and smelled good. Not the kind of man you want to cross. 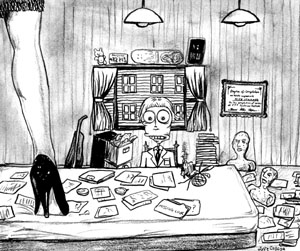 “I say I’ll have to think about it for a sentence or two while trying to get over the elevator remark… Don’t you think it’s a conflict of interest for me to work for you as well as the as-yet unnamed woman with the deep blue or green eyes? Don’t you think that’ll cause conflict, long inner struggles about trust and loyalty filled with tear-jerking confessions about love, dreams, and why I’ve never been able to use the word discombobulate in easy conversation? … Yeah, okay, I’ll do it,” I said resolutely.

“I thought you’d say that. Well, not the part about being discombobulate-deficient, but the rest of it,” TuTone said with an easy smile and an intentional twinkle in his eye. “So I’ve prepared your first assignment. You’re to follow the wild-eyed man in the shabby suit who leapt to his feet and shouted at me in the bar. But don’t breathe down his neck, it drives him nuts. He knows too much about my operations. I want to find out how he knows what he knows. Capice?”

“Sure, with a little milk and sugar if you don’t mind,” I said, already thinking about what I was going to call this the case of. 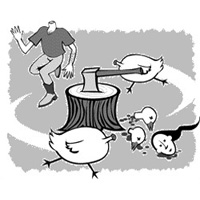 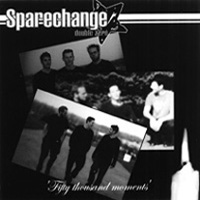